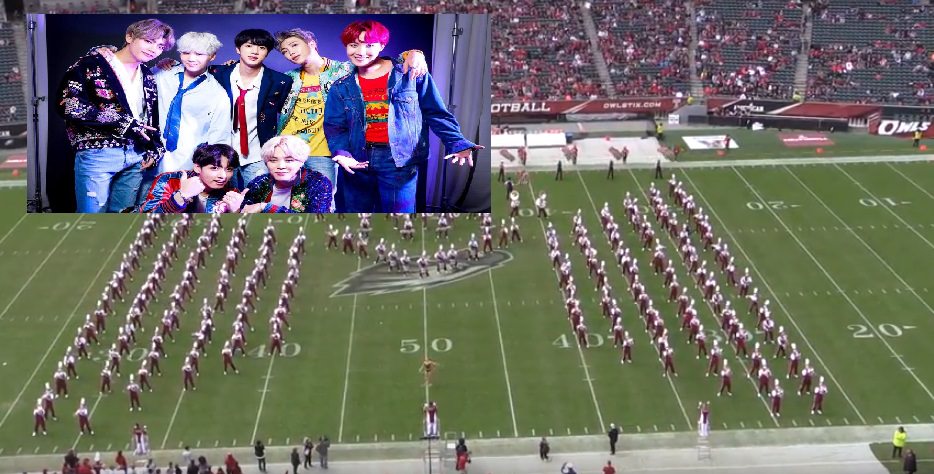 'Over 1 Million views and counting' should be the new nickname for the Temple University Diamond Band.

Every year they perfectly select tunes that no one else in the country is thinking about and masterfully perform them at halftime. Then the recordings of the performances go viral. It's clockwork and it's awesome. Not just for them, but for the entire band world. Ohio State was the first major traditional band to really hit the virality mark followed by Ohio University. Now we need to add Temple to the pack. These band programs are doing wonders for the public perception of college bands and also showing fans that halftime shows can use music you would never expect or maybe not even know.

Their latest show included the chart, Idol, by the Bangtan Boys and it has gone completely viral in 5 days.


With over 1 Million views and counting it is already on pace to pass their Panic at The Disco show which has over 2 million views.

Who are the Bangtan Boys you ask?

They are a seven member South Korean boy band. Imagine the Korean version of One Direction. Once their fans got wind of the performance it spread like fire and brought the college marching band halftime show concept to an audience that had never experienced it before.

We are truly overwhelmed and by all the love we are getting from the @BTS_twt  fans around the world. The @BTS_ARMY are some of the sweetest people on 🌏.
💜🎶💜🎶💜🎶💜🎶💜