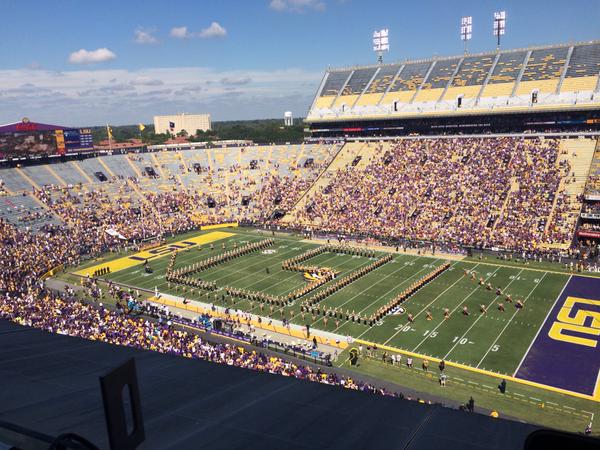 The backlash that has come from the news that the LSU Athletic Department approved a new policy banning opposing bands from playing at halftime of LSU home games has been overwhelming. Now the Athletic Department is reconsidering the ban and may lift it in time for the start of the season.

An article published by The Advocate in Baton Rouge, LA explained today that Eddie Nunez, LSU’s deputy director of athletics, and the university are  discussing the ban after so much backlash from the band world: Nunez said athletics officials plan to meet with members of the school’s risk management team soon to devise a safer plan for the cramped sidelines, allowing the school to lift the policy — potentially ahead of the upcoming season.“We’re still looking at this. This is still being assessed,” Nunez said this weekend.
“This is not a dead decision. This is something we’re actively looking at, going to be meeting with risk management again. We’re going to try to do what we can to make this work. If we can, we will try to make it work. We would love to continue the pageantry.

Unfortunately for LSU the damage may already have been done. At this point bands can't hope that the band is lifted and risk spending a $100,000 to bring the band to a game that they may not be able to march at. The Jacksonville State University Marching Southerners have already decided to not take the risk. Alabama's Million Dollar Band also will not make the trip.

The backlash from LSU fans and the band world has been immense and band Directors across the country are watching this situation closely. Many are hoping that this ban is quickly reversed and no lingering effects are felt. Members of LSU's band told us that they fear other school's will ban them from performing at LSU away games in effect punishing students who had nothing to do with the new policy.

One can only hope that this mind-blowingly dumb policy is reconsidered.