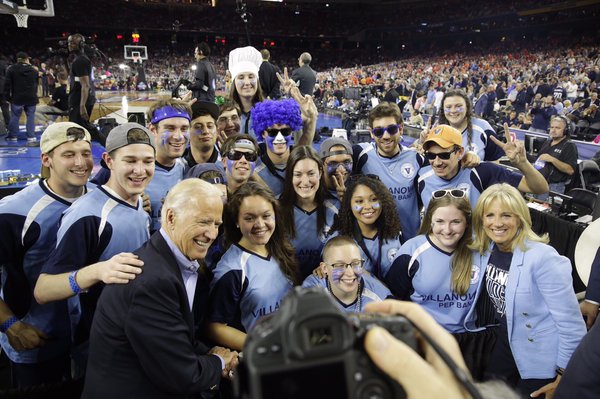 Well, in basketball we do, but two great college band programs will go head-to-head in a death match of epic proportions!

Okay, fine you're right, no one will actually be hurt and realistically we all actually get along so let's try that again... The Villanova Bands program is the oldest and largest student musical organization on campus. They are open to any and all students and offer a scramble band program associated with the football team as well. The band program is under the direction of Dr. John Dunphy. He is famously known for "being in charge, but comfortably out of control" of the band. Villanova last won the NCAA Championship in Men's Basketball in 1985 and Dunphy still to this day carries a ticket stub on his key chain from that game. Last year band member, Roxie Chalifoux, went viral as she was caught crying after the team lost.
She was a senior and that was her last performance with the band. We can confirm that Roxie will be at the game tonight in Houston!

Here's a quick look at what to expect from the band tonight: The UNC Bands program performed for the first time in 1904 at a baseball game! However, it wasn't until 59 years later that the band would make it's debut at a basketbal game. Legendary coach Dean Smith inquired about having the band at a 1963 home game and the rest is history. Since then the band has held a special place in UNC fan's hearts as basketball soared in popularity at the school. Today over 400 students participate in the UNC Bands program including the Marching Tar Heels. The success of the basketball team has lead to five National Championships including their most recent title in 2009. This band program has been there before and is hungry to win it all again. The band is  under the direction of Jeffrey Fuchs who knows a thing or two about basketball as he studied at the University of Kansas. Earlier during the tournament the UNC Band went head-to-head with the Providence pep band in a dance off that quickly went viral.

We all know they can play so let's see them dance!

It's going to be a great game and hopefully all members of both bands cherish this moment as it truly is one of a kind, that is of course unless you go to UCONN and are in the Women's pep band. Four in a row!?! Sheesh! More on that game tomorrow. Make sure to add "TheACCDN" on snapchat to see a unique look at the game from the perspective of a UNC band member.

You can watch the game tonight at 9:15pm EST on TBS.