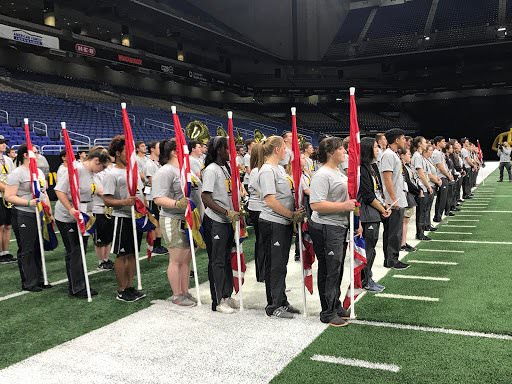 US Army All American Marching Band Ready for the Spotlight Every year, the US Army All American Marching Band selects 100 instrumentalists, 24 colorguard members, and a drum major through an audition video. Students are hand selected by the director along with the board of the National Association for Music Education.
Each student who is selected must be in good standing with their school as well as involved in extra-curricular activities or organizations.

Throughout the past eleven years, their alumni have become high school valedictorians, salutatorians, attend ivy league schools, and graduate from college with degrees anywhere from music education to engineering to broadcast meteorology. As of 2017, there are 105 All American alumni teaching music in schools across the nation. 39 alumni have joined the army and even more join other branches of the military. Many of the current USAAAMB members are still in the process of determining what college they want to attend; however, many of them know they want to pursue a degree in music education and/or performance. This year’s show is entitled “United We Stand”. Members of the USAAAMB will spend a mere 25 hours perfecting their halftime performance which will be performed in front of thousands of US Army soldiers.  Along with preparing for the halftime show, students are able to tour San Antonio and experience multiple events in and around the Alamodome. The US Army All American Marching Band recently developed the Director’s Academy which includes band directors from this year’s All American group. Directors are able to travel to San Antonio and observe rehearsals as well as attend seminars throughout the week. This year, 40 band directors are attending the Director’s Academy with two directors being All American alumni themselves.

Each All American receives an all expenses paid trip to San Antonio for a week, stay at a 4-star hotel, pre-apparel sponsored by Adidas, they perform in a halftime show in front of thousands of soldiers, a year subscription to Halftime Magazine, work with well-renown professors and are mentored by an amazing group of soldiers.

It truly is a once in a lifetime experience.