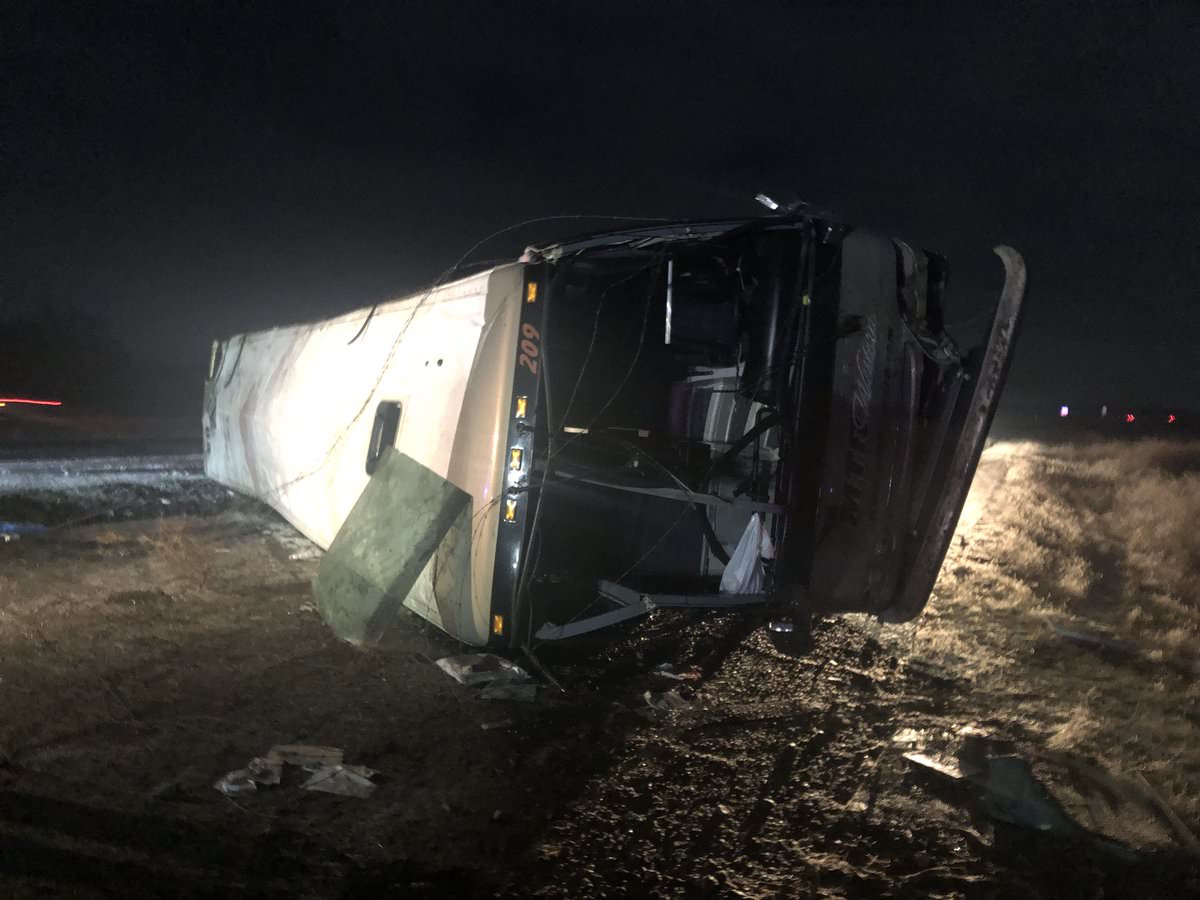 Last night as the University of Washington Husky Band was making it's way from Seattle, WA to Pullman, WA for their annual Apple Cup game against Washington State, a bus carrying the saxophones and baritones flipped on it's side.

The bus was carrying over 50 members of the band and between 40-45 members were transported to local area hospitals for injuries. Those that were uninjured were loaded onto the other buses and all were taken to a local elementary school in George, WA.

We are happy to report that only a few members of the band remain at the hospitals. Most had been discharged by 5am PST this morning. No major injuries were reported by those that were taken to hospitals.

Here's a look at the bus from local reporter Michael Spears who was on scene:

WSP: Too early to say if speed was a factor in these icy conditions —  Tire tread, brakes will be examined as part of investigation. @KIRO7Seattle pic.twitter.com/MrNb8tLRUm

The band missed their scheduled dinner in Spokane so families from across the George, WA and the Moses Lake, WA areas rallied together and brought their Thanksgiving leftovers to the elementary school to feed the entire band. The outpouring of love and support for the band was huge. The entire band was fed.

Husky band bus rolled on the way to Pullman. We're fine, but shaken up and holed up in an elementary school to regroup. A radio station put out a call and the town of George answered: families left their thanksgiving dinners to bring us leftovers and hot food. pic.twitter.com/Dko6bW7hQa

Due to the recovery of the students and potential for more bad weather, the band has made the decision to not continue their journey to Pullman for the game. The band will remain in their hotel and watch the game together while everyone heals both emotionally and physically.

As word spread around the band world, programs across the country sent messages to the Husky Band hoping for a speedy recovery:

@huskyband Thoughts and prayers with those affected by the accident. #FightOn

Thinking of everyone in the @huskyband right now. Hope everyone is ok.

Our thoughts are with the @huskyband family. We hope everyone is ok.

Our hearts and thoughts go out to the @huskyband. We hope that nobody is seriously injured and that everyone makes it to Pullman safely.  #BandFamily #BandLove

Hoping that everyone in the  @huskyband will be ok. Thinking of our band colleagues out west on Thanksgiving. https://t.co/lr3QoTc6Hm

Sending lots of love to our friends in the Husky Band. Keeping you all in our thoughts and wishing a speedy recovery for all those injured. ♥️ https://t.co/VKsm8yyA3d

We send thoughts and prayers to our Brothers and Sisters in the Washington Husky Band as they recover from last night’s accident. Here’s the CMB and the Husky Band performing together at the 2010 Holiday Bowl. #BandFamily #WeAllStickTogether pic.twitter.com/n4opbJYqWi

The local police that handled the accident had nothing but praise for the band staff and students in how everything was handled:

BUS COLLISION::Where credit is due: UW staff and band members handled this incident like professionals. Everyone should be very proud of how calm and thorough @huskyband Director Brad McDavid and all the other Huskies acted. @wspd6pio

Keep the band in your thoughts especially those students who are still in the hospital. Hopefully everyone will be released today.