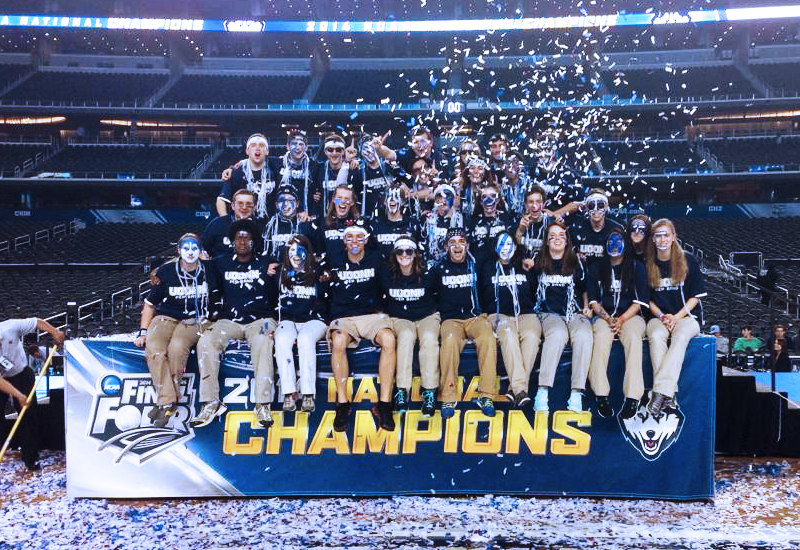 April 5, 2016
Tweet
TONIGHT a champion will be crowned and it will not be Villanova!

That's right, the Women's Basketball Championship game is tonight and that means the beautifully balanced brass of the University of Connecticut Band Programs goes up against the juicy high note rippin Orange of Syracuse University also known as the Sour Sitrus Society. Yes, that is the pep band's official name!

Now, while on the court the game may be decided by the first time-out, based on UCONN's track record in the tournament, the real match is going to be in the stands between these two programs. We could not have asked for a better pairing to cap off the basketball season. The University of Connecticut Band Program has had a wonderful tradition of playing at basketball games. In fact the pep band is actually broken into four smaller pep bands with each having a unique name. Three are named after former band directors (the Maker Band, Gillespie Band & McMullen Band) the other is called the Husky Band. These bands alternate playing at events across campus and trade off at big events like the NCAA Tournament.
This pep band is no stranger to championships. 13 of them to be exact and 20 Final Four trips. They are under the direction of Dr. David Mills, who is on his way to legendary status in the collegiate band world. After arriving in 1990, Mills took the UCONN Bands program to new heights and has helped maintain the tradition of excellence we all have come to know from both the UCONN Marching Band and Pep Bands

Here's a taste of what you might see from them tonight:


The Sour Sitrus Society. Where do we begin?

Let's start by letting one of their members explain the experience of being in the band: "When I joined the Sour Sitrus Society, I was under the impression that I was just another member of another basketball band.  But I was wrong.  I am a part of something bigger than myself. Since joining Sitrus, I’ve travelled to Washington D.C., Chicago, and now Houston.  I’ve eaten some awesome food and done some pretty cool touristy things. I’ve sat front row for some of the most incredible basketball games I have ever seen (that UVA game was insane!).  I’ve appeared on national television multiple times.  Heck, I got recognized at the mall the other day by a store manager as the “crazy band girl with orange hair.” -Marisa Frigoletto, Sophomore, Baritone.


The band is a student-run pep band that supports multiple sports and events across campus. Many members are also part of the Pride of the Orange the Syracuse Marching Band. The band program is under the direction of Dr. Bradley Ethington and Profesor Justin Mertz.

Here's what you can expect from them tonight:


Enjoy this amazing event and as we all saw last night, anything is possible!