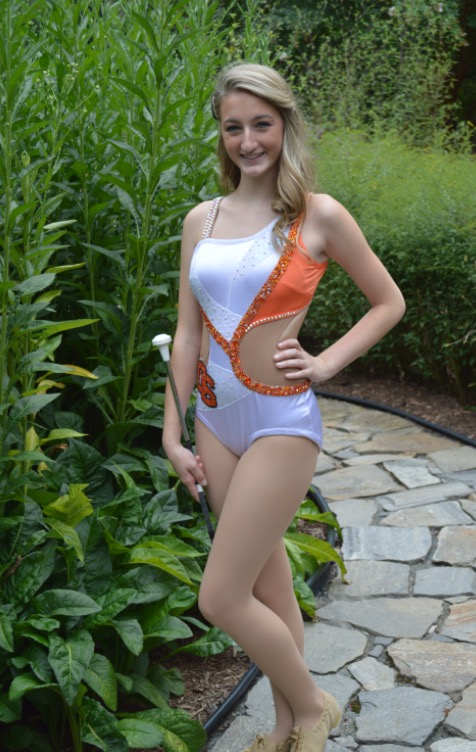 September 15, 2015
Tweet
In today's #TwirlerTuesday spotlight we would like to introduce you to one of Oregon State's feature twirlers, Danielle Cormier! Danielle is a freshman studying political science and pre-law. CMB: What made you want to twirl in college?

My older sister, Courtney Cormier, was a part of the majorette line and the Feature Twirler of The University of Tennessee in 2007. When I would go to games and watch her twirl during the "Salute to the hill," pregame, and halftime, I knew I wanted to do that when I grew up too.

CMB: What is your twirling background?

I have been twirling since I was an infant. I was born in New Hampshire and was under the direction on Gina Hutchingson with the Red Stars until I was 8. Then I moved to North Carolina and became a part of Pizzazz Star City Twirlers based in Roanoke Virginia under the direction of Joan Duus, Missy Townsend, and Harlie Dale. I would drive 2 hours, there and back, at least twice a week for lessons and team practice.
When I was a freshman in high school I decided to become a solo twirler under the direction of Lori Cobb who lives about 5 hours away in Yorktown, Virginia.

CMB: How do you prep for a game?

Tons of practice and weeks of band camp!

CMB: What advice do you have for younger twirlers who want to twirl in college?

Never get discouraged if your original plans for college twirling don't work out. My first choice for college denied me as a student and I was devastated however, everything ended up working out in the end. You have to remember that there are so many schools who have opportunities for twirlers, so keep your options and your mind open. I am really happy with my final decision and I am actually glad it worked out the way it did.

CMB: What is your favorite move/trick to do on the field?

I love to do three baton juggles!

This one time at band camp my high school band director wanted me to twirl around the trumpet soloist so my coach suggested I dance around him. Long story short, I ended up doing the tango with him and he had to dip me to "add effect!"

CMB: What has been your favorite moment so far?

My favorite memory is the moment I was accepted as Feature Twirler of Oregon State. Although it was not exactly an "on the field moment," there is nothing more satisfying than knowing your years of hard work have paid off. Go Beavs!