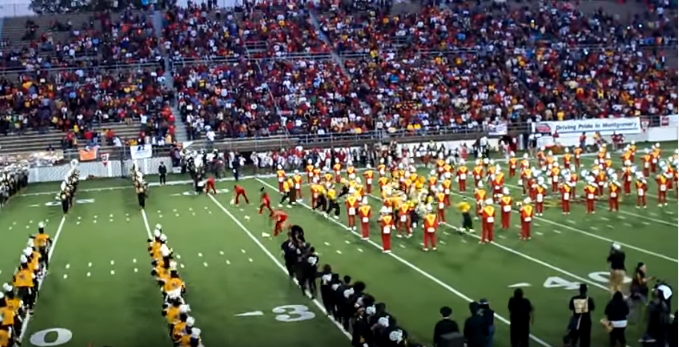 Have you ever had a visiting band come to your school and take a little too much time? Time at halftime is life. Without time, bands don't get to perform and if you don't perform then what's the point of having a band!?!

But the real question is what would you do if a band went far over their time? Would you let them finish or would you take the field?

In this edition of Turf Wars we are taking you back to 2010 when the Tuskegee University and Alabama State University bands met at halftime. Tuskegee took the field first. As they crept closer and closer to their end of their allotted time, the ASU band started to get worried. When would they finish? After a few minutes ASU had enough. This was their turf and they had to perform.

The drum majors entered and fired the first warning shot. When Tuskegee didn't stop they brought out the calvary and started halftime while Tuskegee remained on the field.

It was a sight that most fans had never seen before.
Two bands on the field at the same time and nothing in their way but a head on collision.

And we've got it all on tape: