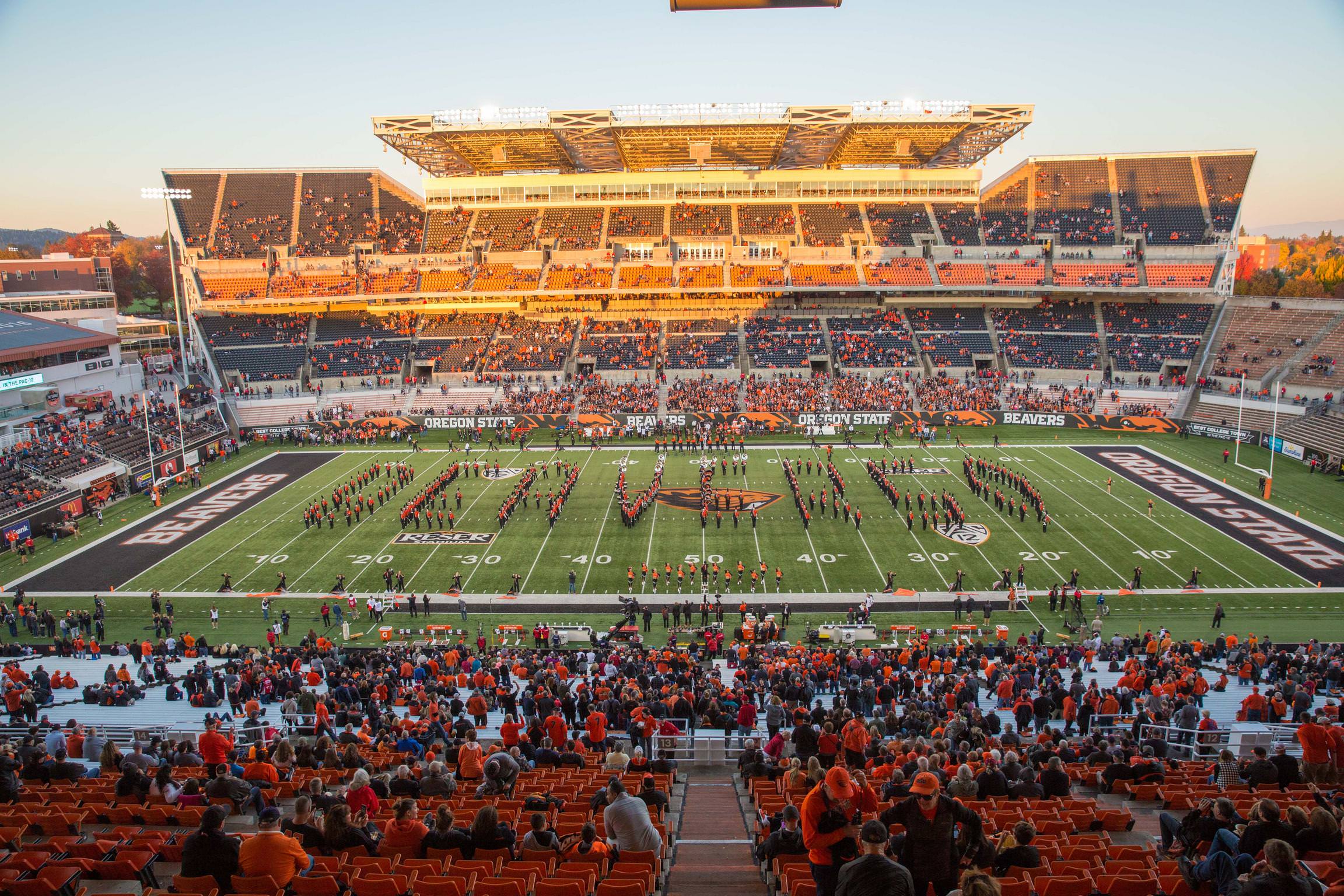 To All Our Fellow Football Fans

September 12, 2018
Tweet
Olin Hannum is the Director of the Oregon State Marching Band. This is a special feature article on how to enjoy a collegiate marching band performance

Hey College Football fans! Olin Hannum here from the Oregon State band and today I'd like to help you better understand what exactly is happening at halftime. The following is a basic college marching band show primer. Hopefully by the end of this article you'll have a better understanding of what is happening on the field during your favorite band's performances.

If you went to see the 2018 Foo Fighters tour, and their opening act was a series of fencing matches, that would probably feel out of the ordinary. I’m sure fencing is a great sport, and I’m sure it has an interesting and complex combination of rules, strategy, culture, and history.
However, it would likely not land well with you, the viewer who was in the building for a rock and roll concert to begin with.

That is one of the fundamental tensions at play during a college marching band show. Marching bands are firmly linked with college football, even though they are very different forms of entertainment.

Some of you who make the long drives to our country’s stadiums are deeply versed in the traditions, histories, and performance styles of the bands that call those stadiums home. Many of you are alumni of these great band programs, or have friends or relatives who are. Many of you have children in the band, or have been a season ticket holder long enough to have learned about the culture by osmosis.

It is safe to assume that many, if not a majority of fans do not have that kind of relationship with their band program.

1. Know the difference between Pregame and Halftime College bands typically perform shows both before the game starts, and at halftime. The pregame show is a celebration of the pageantry and fanfare of college football. It’s part of what makes the college game experience feel different than its professional counterpart. The pregame show is full of campus traditional songs, cheers, fanfares, and the Star Spangled Banner. The Fight Song is almost always featured heavily, sometimes the university Alma Mater is performed, and crowd participation nearly universal.

A good pregame show builds toward the start of the game and gets a stadium ready to cheer their team onward toward victory. Very often pregame shows have long roots. At many universities, the pregame show has remained largely unchanged for decades. Pregame is where you will find iconic forms and visuals from the history of the band program, university, and football team. The marching band show is an American art form that began in the mid 19[sup]th[/sup] century, and pregame is where that history is on display.

By contrast, the halftime show design space is a much more open. Often bands will perform modern popular music or music from a specific genre. Typically between three and five songs, these shows are specific to the year they are performed and many times will only be performed once. If a group wants to try something new, or play a style that they don’t normally play, halftime is where that would happen. 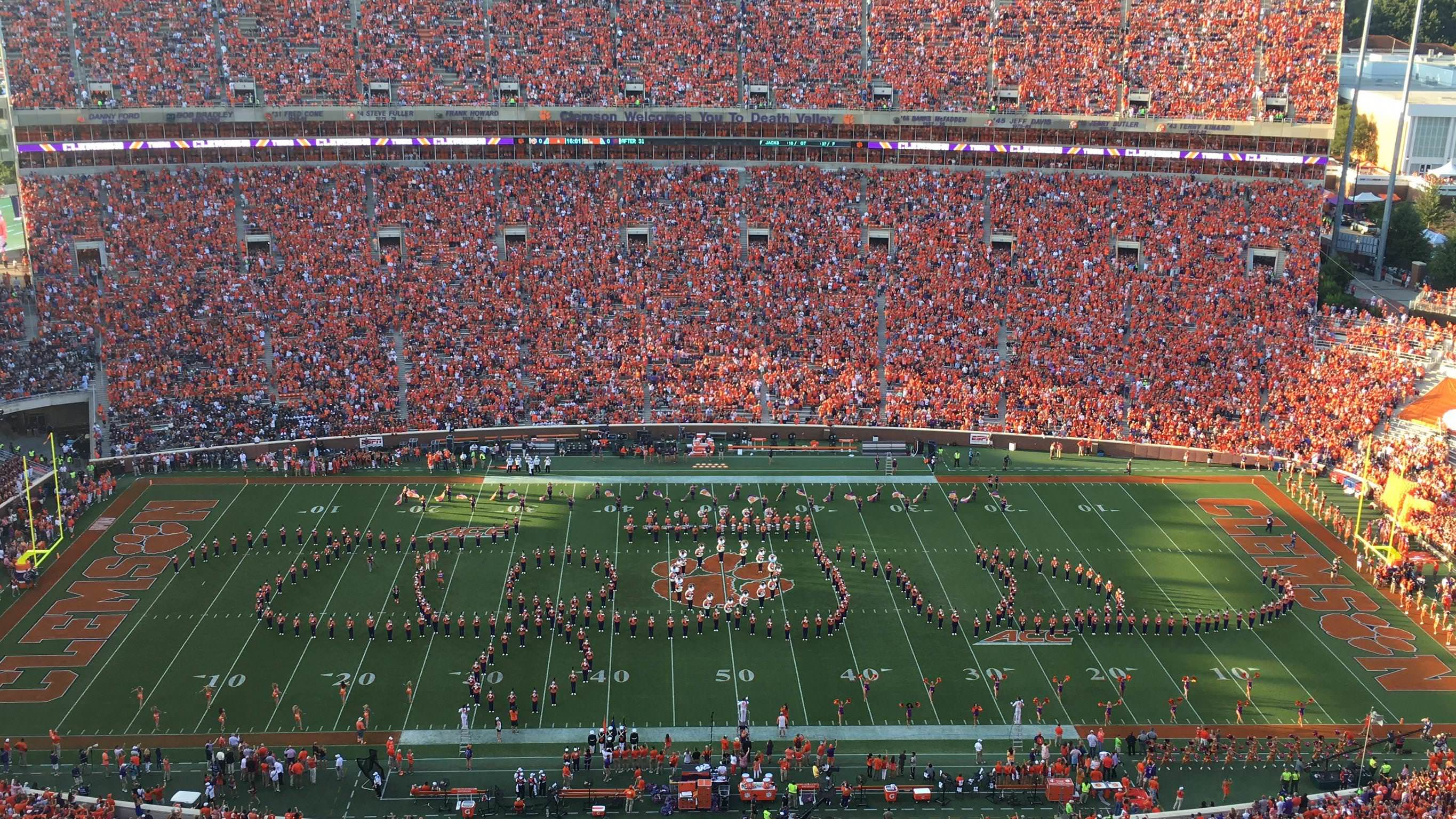 Contrary to watching the actual game, being in the first thirty rows is not necessarily an advantage when taking in a college marching band show. They are designed to play for everyone in the stadium, and the forms and movements are often broad and overstated. Being higher up gives you a better angle to the field.

Don’t worry about being able too far away to hear the music. College marching bands are large and have a powerful sound. If you are down next to the field, you’ll most likely only be able to hear the instrument group that is right in front of you. Being farther up and farther back will give the sound a chance to blend, allowing you to hear the entire band.

3. Identify the music that is being played

During pregame, almost everything you’ll hear is either original to the university, or meaningful to them in some way. Listen to the announcer to help guide you through which piece is which.

During halftime, think of collegiate marching bands as very large, very loud cover bands. The trouble of course is that we don’t sing lyrics. Generally, bands try to make it easy to pick out a melody, hear it as being sung, and identify the song being played. Many times the announcer will help you through this by either giving context clues or just outright announcing the song names.

4. Do your best to decipher what you’re seeing on the field 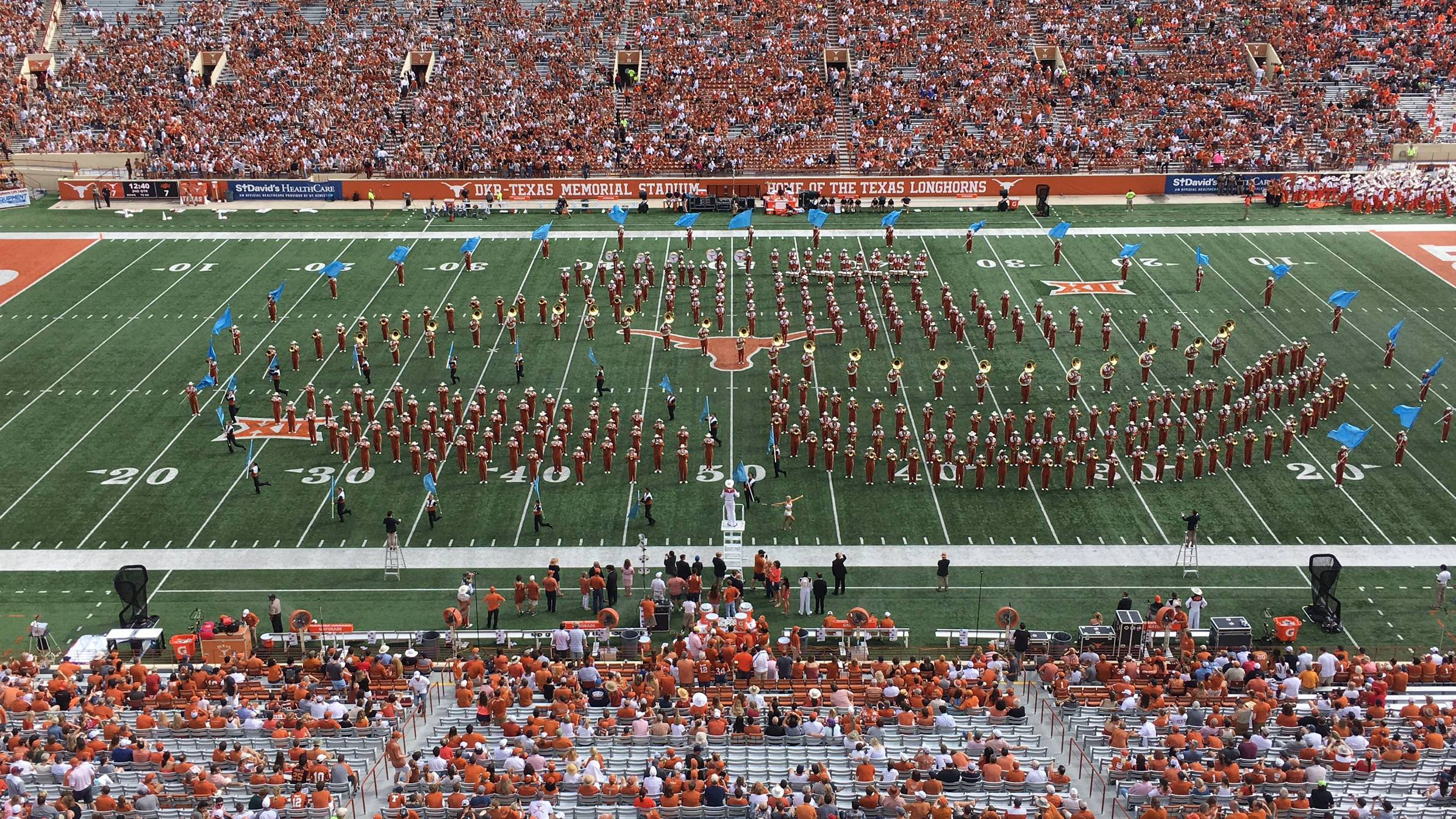 This part is a little tricky to cover without getting technical. Everything in the marching music world can generally be categorized as musical or visual. Many times the forms are easily read, and traditional shows often contain classic iconography. During halftime you might see pictures representing show themes or movements that are intricate and individualistic.

A good place to start here is to understand that everything on the field was designed by a human being to go with the music in some way. Start there and ask why what you’re seeing might have been written in that particular way. Not everything is a picture, many times we make forms or create pieces of movement just because it looks cool.

If you know what music is being played and you’ve pieced together some of the visuals, a theme has probably emerged. Many times these themes can be obvious. Common show themes are: Music by a specific artist, patriotic music and imagery, music from a specific genre, top hits of the summer.

A show theme can be almost anything, and sometimes connecting the dots can be somewhat of a mental stretch. Maybe the show is making fun another school’s desert climate, so the music has “Ring of Fire” by Johnny Cash and “High and Dry” by Radiohead. Maybe the show is about the band getting new uniforms, so some of the music is the themes to How It’s Made and Project Runway. Maybe the band is shooting for higher artistic goals and is playing a show comprised of French-impressionist music.

Most of the time it’s not that hard to piece together. If all the music in a show is by Green Day, don’t overthink it.

6. Allow yourself to be open to entertainment

The beauty of the American collegiate marching band is that there are so many different kinds of performances within the genre. There is no rubric or score sheet that can objectively say if a show is good or bad. The external measure of a performance is its impact on you, the audience.

College football audiences can be very different across conference and region, and the bands that perform for those audiences have adopted performance styles and traditions that are just as varied. Every band has its own performance presence, and brings something to their stadium that is found nowhere else. Find out what’s unique about your band, and celebrate it. The variety is truly part of what makes the art form so interesting.

Sometimes all it takes to “get it” is making a decision to be present and actively absorb a show in its entirety. The type of performance happening in front of you is unique to this country, and the specific performance might be unique to that exact game day. Take in what’s being given, and recognize it for what it is: a performative reflection of the university, the history and tradition of a specific place, and an experience that cannot be had anywhere else in the world.

Now the next time you attend a college football game you'll have a better understanding of what is happening and how you can enjoy it even more. We hope to see you at a game soon!