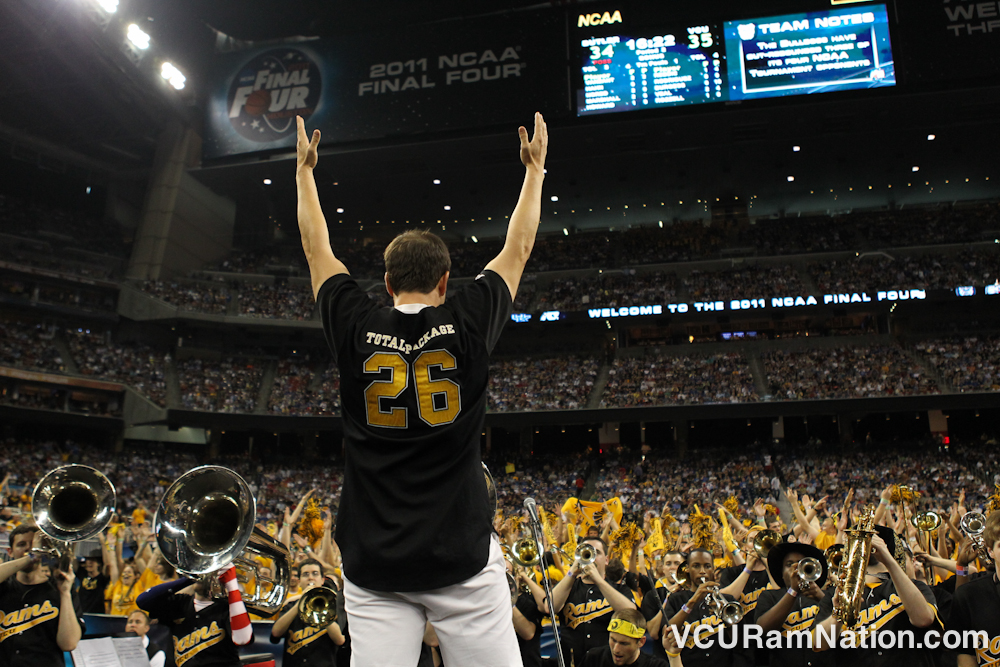 That's the best way to describe the news that came out of VCU yesterday as Ryan Kopacsi and VCU decided to part ways. Kopacsi has been the Director of The Peppas, VCU's basketball pep band for 18 years. In those 18 years he brought the band to new heights including making them one of the highlights of the NCAA Tournament every year. Their energy during games, musical arrangements and creativity in the stands turned them into a household name. Kopacsi was at the center of that evolution.

"I am so incredibly lucky to have had The Peppas in my life for 18 years now. Honestly the group has probably saved my life. I would be so lucky to think I could have impacted just 1 person the way the group has impacted me. Thank you Peppas. Thank you VCU. Thank you fans. Thank you critics.
You have all played an important role in my maturation process," Kopacsi stated on his facebook page.

The Peppas students are still in a state of shock an hope that somehow the school will bring him back, but it looks like Kopacsi has already made up his mind, "It seems that this step forward will be with out me. Me & the AD have discussed contracts for weeks and can not agree on vision, trajectory, and time frame. I'm disappointed to say the least in the decision of the administration to sacrifice all of what The Peppas bring to our Players, our fans, our university, and our city."

Students and fans took to twitter to voice their feelings on the news:

Can not believe the news about our conductor. Please find a way to make him stay

I've been to enough away games to know that VCU's Pep Band is the greatest there is. Incomparable. It hurts me to hear the news tonight.

I love my school but come on VCU Athletic Department! You can't just let the best band director in the nation just walk away like that! #VCU

It's the end of an amazing era at #VCU: Peppas band director Ryan Kopacsi is stepping down. No one else made media timeouts must watch.

End of an era at VCU: pep band director Ryan Kopacsi stepping down. Nobody brought the funk at basketball games like VCU band.

The director of the VCU band, “The Peppas”, Ryan Kopacsi, will not return. Could not come to agreement on contract with VCU administration.

Now VCU will move forward into a new era that hopefully will be just as fun as the old era:

For as much as Kopacsi claims that The Peppas "saved him", he really did the saving. He gave hundreds of students a place to have fun and be themselves. He made the band relevant. He brought attention to an Athletics department and school that was searching for an identity after Shaka Smart left for Texas. He challenged the band world to move outside of their comfort zone.

He put on a show and it was a damn good one.

At VCU the energy at games from the band under Kopacsi, has been coined "The Peppas Effect". As the band begins it's new era without him let us remember the last 18 years as "The Kopacsi Effect".