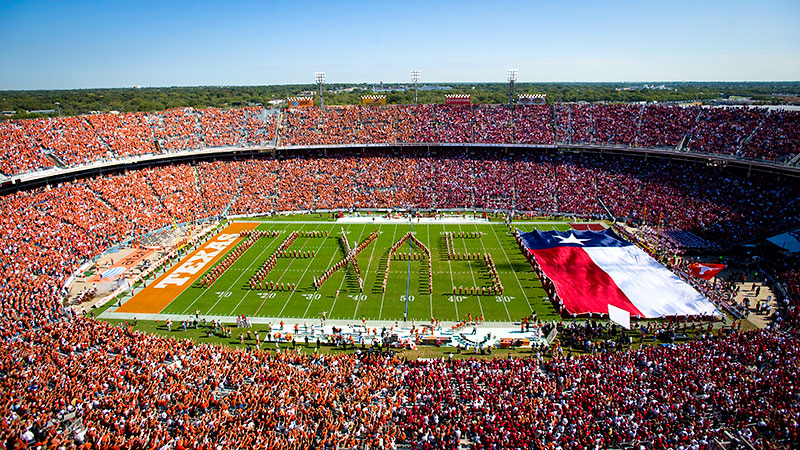 The Anatomy of the Red River Rivalry

October 14, 2017
Tweet
This weekend, the Texas Longhorns and the Oklahoma Sooners will face off in the 112th match-up of one of the nation’s longest-running college football rivalries. For members of the schools’ respective marching bands, this game often represents the “official” beginning of football season, and is a chance to prove their mettle on and off the field.

“Texas Weekend” or ”OU Weekend” (depending on where your loyalties lie) marks a rite of passage for many freshman members of both the Longhorn Band and the Pride of Oklahoma, since it’s usually the first away game every season that the entire band will attend.

This is true for both bands, who will roll into Dallas on their respective fleets of charter busses early Saturday morning.
Though they’ll arrive at Fair Park hours before kickoff on game day, there’s no time for any Fletcher’s Corny Dogs!

Instead, they’ll perform last-minute uniform and instrument preparations, equipment and logistics checks, and a final run-through of the day’s music to hopefully calm any nerves.

Hunter Purvine, 2016 drum major for the Pride of Oklahoma, explained the band’s critical role in a game day atmosphere where emotions run high:

“We have three missions as we make our way down to the Cotton Bowl for this historic rivalry,” he said. “The first is to be relentless as we support our team through four quarters of football. Second is to be the finest ambassadors for our university, and to do so with a high level of class.”

Finally, he said, the Pride will of course provide engaging and entertaining performances during its pre-game and halftime performances, as well as keep OU fans cheering in the stands.

“Each year has different memories that I will cherish forever,” she said. “Freshmen who will be experiencing it for the first time are in for the wildest game day experience hands down! The energy goes through the stadium like electricity!”

Padavick explained that her first year, she wasn’t sure what to think of this so-called rivalry, and was skeptical of everyone’s assertions that it would be vastly different from any other game day.

“Once I actually set foot in the stadium, I finally understood what everyone was talking about when they said ‘rivalry,’” she said. “Both sides are so passionate and love their team and school more than anything. I’m always so grateful to be a Longhorn, and I love my school more and more each year at this particular game!!”

A similar change of perspective isn’t uncommon among those who become personally invested in this storied game day and all that it entails.

Ryan Lipscomb is a graduate assistant starting his third year with the Pride of Oklahoma, after growing up a devoted Oklahoma State fan. During his five seasons marching with OSU, Lipscomb said he felt they were OU’s primary rivalry.

After experiencing this game, though, his feelings changed: “It just isn’t the same.”

“Last year I was in awe of the spectacle of the whole event,” said Lipscomb. “The Fair, 90,000 fans (who believe the season is made or lost with this game), two amazing bands, and two history-rich football programs.”

Of course, this storied rivalry has the same thing in common with every other big matchup you’ll see this season: both teams want to win.

It’s for good reason, too, since the Red River Showdown is almost always significant for determining the Big 12 conference champion. In over 90% of the meetings between OU and Texas since 1945, at least one of the teams has come into the contest ranked among the top 25 teams in college football.

Despite the beliefs of some fans, the game itself is a central aspect for many band members too.

Longhorn Band member Tanner Widis said his favorite memory of the rivalry game was last year, calling it a “special experience” to watch a struggling Texas team come together to beat Oklahoma.

It’s about more than just a (W)

Beyond just winning, though, this rivalry game brings out a massive display of pride from supporters of both teams.  As one of the only college football matchups that takes place in the center of a gigantic state fair, there’s enough school spirit (and fried food) to go around for fans on both sides.

“There are plenty of big rivalries across the country…Ohio State-Michigan and Alabama-Auburn come to mind immediately,” said OU’s Lipscomb. “But I have a hard time thinking of any other major rivalry where the teams play in a neutral location every year.”

Lipscomb pointed out that it’s a different experience for students and fans to attend other rivalry games, since these spectators are usually either part of a vast majority of home fans or a tiny minority of visitors.

“The OU-Texas game is definitely unique, in that you know that there will be just as many Texas fans at the game,” he said. “No matter what the records are, both sides expect to win. I believe that one of the greatest visual aspects of college football is the orange/red split of fans on the 50-yard line of the Cotton Bowl.”

Rachel Brookins, member of the Pride of Oklahoma, offered her perspective on this unique 50-yard-line phenomenon from the field:

“One of my favorite parts of the game is when we get to march pregame,” she said. “We start out on the Texas half of the stadium where everyone is booing and yelling so loudly.”

Upon crossing the 50-yard line, though, she said this booing almost instantly turns into the loudest cheering imaginable.
“It’s always the best feeling to hit that point on the field, and to hear and feel the energy from our fans,” Brookins said. “It’s such an incredible way to get pumped up for the game!” 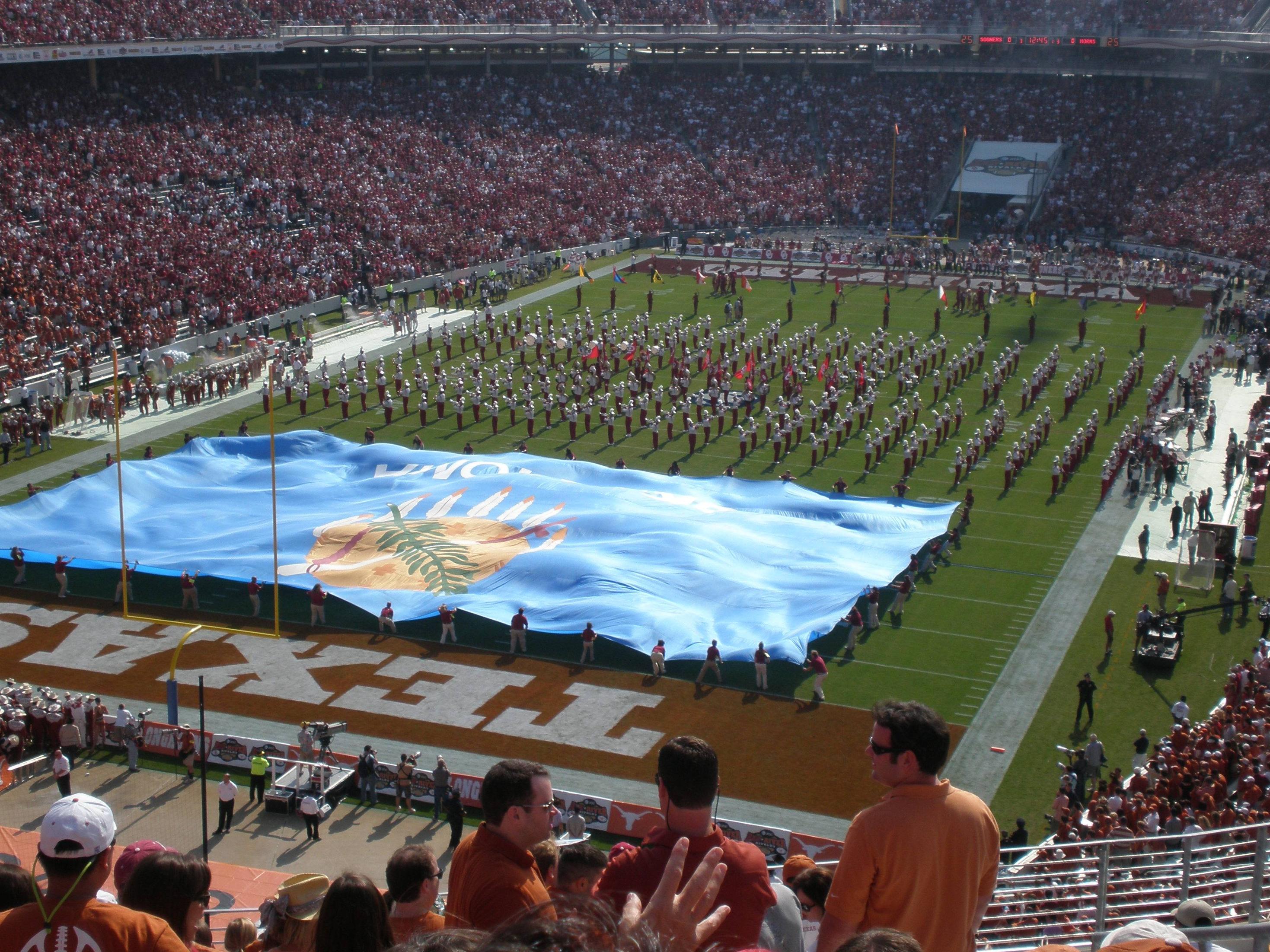 Both bands also battle it out to see who has the largest state flag. Since one endzone is painted per school, the bands use their large flag to cover up the other school's name in the endzone in what is always a fun moment during pregame.

No matter either team’s record coming into this rivalry game, it seems both fan bases will never fail to appear en masse to support their school with gusto.

“Regardless of the season that either team is having, you can always count on both fan bases to support their team at the game since it's such a storied rivalry,” said Widis. “I think fans on both sides recognize how special this is. LHB is both grateful and lucky to be a major part of the rivalry, and the team and fans always appreciate our support.”

Outside of the game itself, there is plenty of fanfare wrapped up in both bands’ traditions for the days and weeks leading up to their trip.

During game weekend, both bands will perform an exhibition rehearsal at a high school stadium, which is usually attended by many local fans and band families. The Pride will also be attending an event at the OU Club of Dallas, before hosting a party where their students can burn off some excited energy.

“Some of the best traditions are not seen, because they take place in transit on the busses,” said Purvine. “This week is full of all sorts of wacky and fun traditions, from costumes to specific section events. The trip is a wonderful way to celebrate the friendships and relationships built throughout the season.”

Brookins said the band devotes an entire “Texas Week” to getting hyped for the big game, including dress-up days at rehearsal.

“The entire week leading up to the game is really incredible bonding time with our individual sections,” she said. “It’s probably our favorite week of the year. The game, of course, is the most important part though. Coming out with a win is the perfect end to the week.” 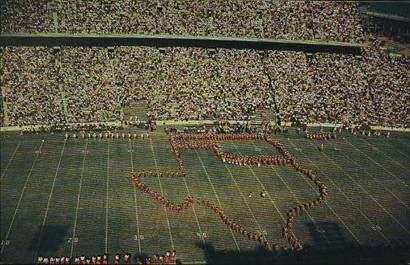 Despite the game’s outward appearance as a feisty rivalry, each of these two great band programs has a lot of respect for the work put forth by their counterparts at the opposing school. This has been the case for many years as the bands salute each other often during halftime shows and many of the members are friends with each other from high school or drum corps.

“It goes without saying that two great bands at one football game within such a storied rivalry is enough to make any spectator go wild!” said Longhorn Band Drum Major alumnus Kevin Kwaku. “The element that college bands provide to the atmosphere of college football is nothing short of electric.”

Purvine said it would be exciting to highlight both the rivalry itself and the bands a bit more through other events, like a battle of the bands or pregame showcase involving both ensembles.

“There is a moment [at Fair Park] where we each warm up and play through our shows, but it's relatively close to our buses and doesn't provide the environment for maximum crowd engagement,” he said. “I feel an event like this would promote an even healthier relationship between the bands, and would be a worthwhile experiment to really hype up fans before kick-off. Get ready for a battle on the field and a battle from the stands, because it's going to get loud!’

Student organizations within the bands have their own traditions as well, which often focus more on what they have in common than what goes down on the field.

“Every year we sing our traditional TBS songs with the OU chapter,” said Padavick. “Even though we are rivals, we come together as sisters to sing and show our love for each other and Tau Beta Sigma. We also exchange gifts between our chapters, and it is always so moving to see the creativity and generosity of the OU chapter of TBS.”

No matter which team comes out on top, emotions run high for all the fans and band members in attendance. Kwaku shared one of his favorite memories, which occurred after a loss for Texas in 2014.

“I will never forget hearing the entirety of the Texas fan base yelling TEXAS! FIGHT! in support of our football team,” he said. “It took everything in me not to tear up at the time, as it was the proudest I have ever been to call myself a fan and supporter of the University of Texas football program.”

Kwaku added that the tradition and upholding of the rivalry on both sides has always impressed him.

Padavick agreed, summing up the experience for band members representing both Texas and Oklahoma, from freshmen to seniors:

“Everyone is so invested in the game,” she said. “The pride of both schools is definitely evident the entire time! Even though the competition gets intense, the love for both schools is amazing.”