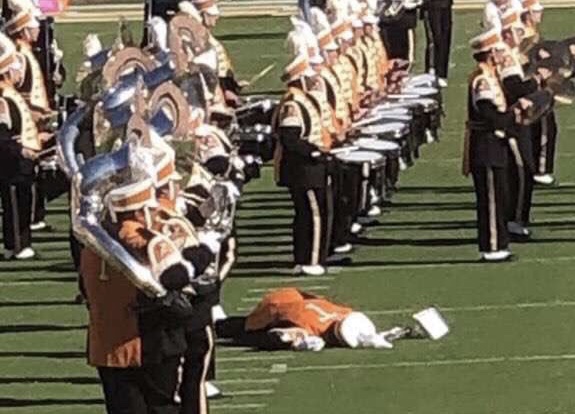 It was a rough day for the Tennessee faithful on Saturday. Their football team had a shocking loss to Georgia State to start the season and hot temperatures caused multiple fans heat exhaustion.

Unfortunately that heat exhaustion also hit a member of the Pride of the Southland. As the band was beginning their halftime show a member of the trumpet section was seen passed out in the middle of the field. At first fans were unsure if it was part of the show or a more serious situation. As staff began to run onto the field it was clear that something was wrong.

The staff were quick to act and get the band member off the field and into the shade.

After halftime the band tweeted out that everyone was okay. Some shade and hydration did the trick.

The incident has sparked a larger conversation about marching bands and older marching uniforms. While some bands have taken measures to issue alternate uniforms like shorts and t-shirts for the beginning of the season, many bands have not done this. Some even refuse to discuss it.
Older traditional uniforms are known to be very warm as the band wears them through out the fall when it gets colder. It was over 90 degrees during halftime with a high level of humidity, not ideal for anyone wearing a heavy uniform.

Bands typically wear the uniforms to the stadium, through pregame and then take their jackets off to cool down. They then put them back on for halftime and take them off again once they return to the stands.

Regardless of weather and breath-ability of the uniform it can't be stressed enough that the best way to avoid passing out is to stay hydrated.

Let this be a reminder to all college marchers to stay hydrated this fall especially these first few weeks of the season.