Strike Up The Band

February 26, 2017
Tweet
Every marching band alum would probably say they learned a lot about teamwork and the power of supportive friendships during their time in band.

Last year, sophomore mellophone and music education major Jaron Lehman was diagnosed with testicular cancer, which spread to his lymph nodes and required three cycles of chemotherapy.
Jaron participated with the Redcoats throughout the fall 2016 season, despite having to miss several rehearsals and dealing with exhaustion due to his treatment.

“It certainly took up a lot of time and made me incredibly tired,” said Jaron.

In late 2016, Jaron received the news that his cancer was in remission, but right around then, Hunter Moreland, a senior alto sax player double majoring in philosophy and linguistics, was dealing with a lingering cough that he couldn’t shake.

His parents insisted he visit a doctor while home for the Thanksgiving holidays, and tests showed a stage II case of Hodgkin’s Lymphoma.

“There’s this stigma when you hear cancer that it’s extremely bad and the outcome isn’t going to be good,” said Hunter. “But you shouldn’t let cancer dictate your life; that’s the philosophy that I’ve been living by.”

Luckily for both of them they were surrounded by 300 friends who sprung into action to make sure that the outcome was in fact going to be a good one.

Strike Up The Band

Naturally, news of their diagnoses spread through the Redcoat band family and across the country. It was unfathomable to think that one band could have two band members battling cancer practically at the same time. 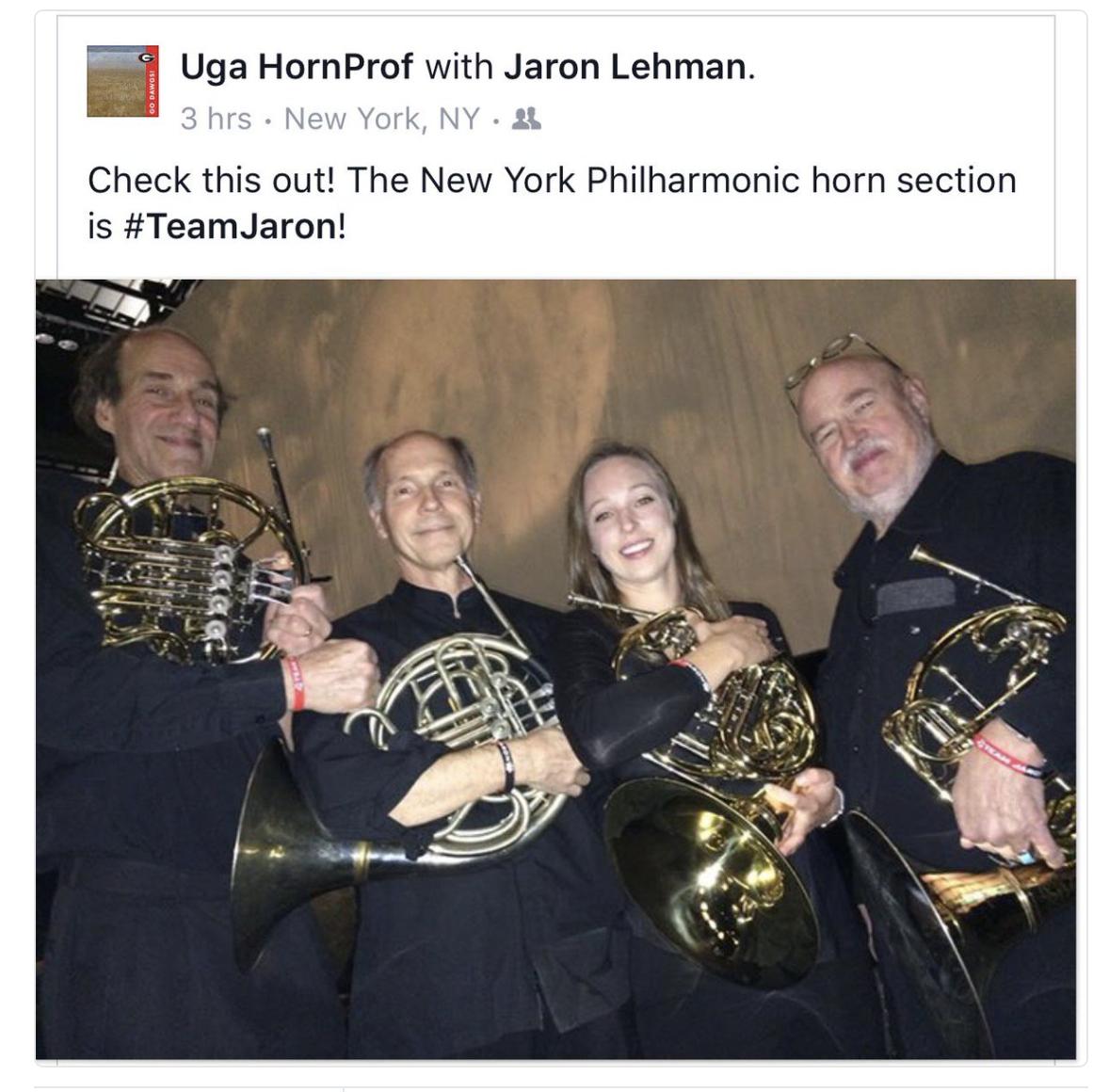 Last fall, the Redcoats changed their official Twitter handle to “Team Jaron,” and sold bracelets with the slogan to fundraise for his treatment. Eventually the New York Philharmonic’s horn section was caught wearing them too.

During games, visiting bands came to visit Jaron and offer their support and encouragement. They sent him letters, tweets and bought the bracelets too. 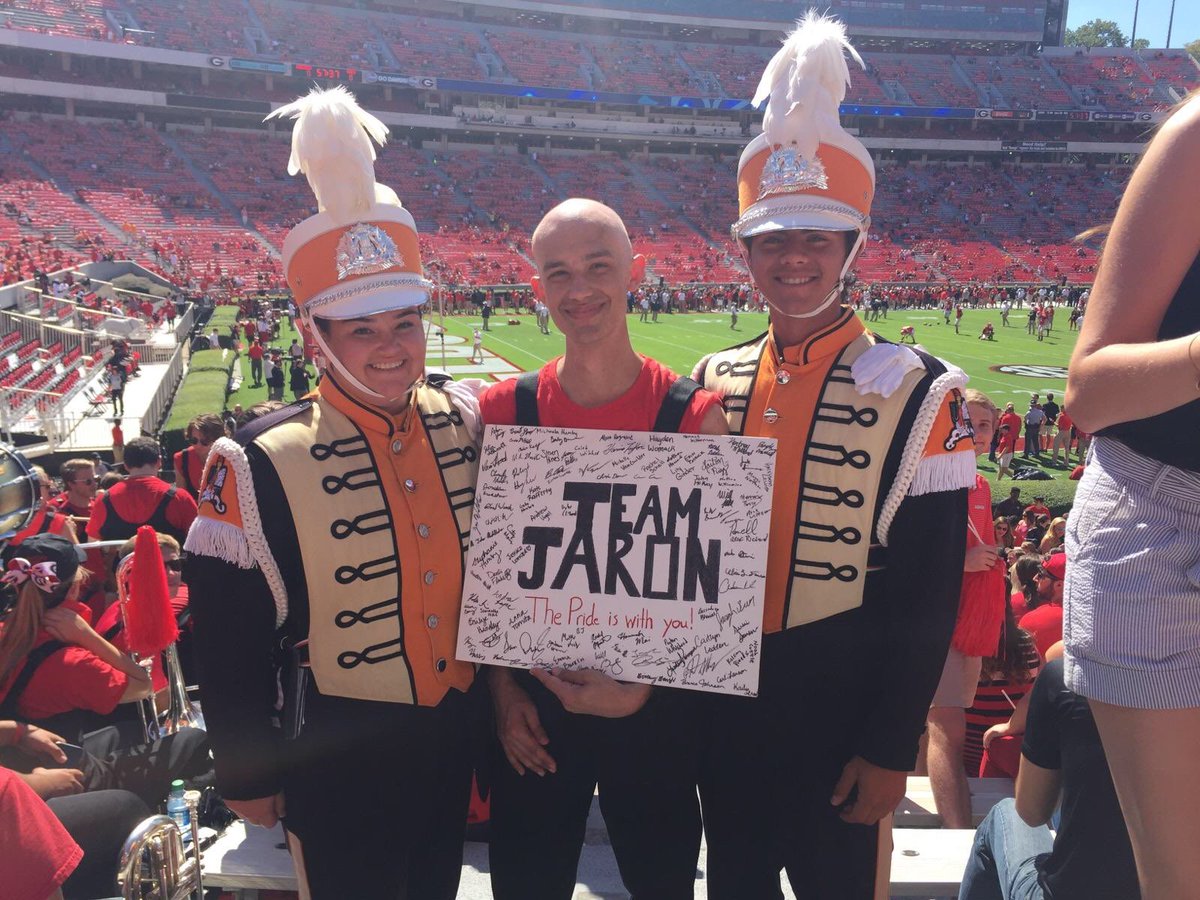 Anything that they could do to help pick up his spirits the band world was all over.

The social media messages for Hunter have been similarly overwhelming, even though his diagnosis came during a time in the season when the band wasn’t meeting regularly. UGA Athletic Director Greg McGarity sent a note of encouragement, and local media ran stories about his battle.

Hunter had to take a leave from school at the end of the fall semester due to starting his cancer treatments, which caused him to miss his final game ever as a member of the Redcoats. Determined to still feel part of the band and to show his support of his friends who had been supporting him, Hunter wore his Redcoats uniform to his treatment the day of the Liberty Bowl. The picture quickly went viral.

As fate would have it, Hunter's doctor, Dr. Davey Daniel, is also a Redcoat Marching Band alumnus and was completely in support of Hunter's desire to wear his uniform that day.

We were missing someone today… pic.twitter.com/djnJuluZBu

Jaron realized throughout the process what a blessing it was to have the support of his friends in the Redcoats and the Hodgson School of Music.
“I honestly have no idea where I’d be without the phenomenal support of my Redcoat brothers and sisters,” he said. “They were there for me. It may seem simple, but even the smallest Facebook comment or message made my day brighter.”

“It’s nice to see all the people that really do care,” he said. “Having that big of a support group really does help, and it works to try and take your mind of all the bad stuff that’s happening with your treatment.”

Jaron and Hunter both said maintaining routines as much as possible—including participating in Redcoats—has helped by giving them something positive to focus on during a hectic time.

“Because of my friends and Redcoats and music, I was able to keep cancer in the treatment room,” he added. “I had very few emotional breakdowns because I was usually too busy to let the darker, distracted thoughts associated with cancer enter my mind.”

UGA Assistant Director of Bands Brett Bawcum said it’s been amazing to watch the students rally around each other, while still being conscious of their friends’ needs.

“They make it clear that they’ll do anything for each other,” he said, ”but they’re also wise enough to know that normalcy—rehearsing, performing, hanging out, joking around just like they always do—can be really nice for someone who’s going through a profound challenge.”

In this case, Bawcum believes the Redcoats have responded exactly as expected: with encouragement, care, and respect.

“The students see a friend in need, and they basically offer any and every resource at their disposal,” Bawcum said. “It is one of the most heartening things about this job. Working with band students is an insurance policy against losing your faith in humanity.”

Hunter is ready to graduate on May 5—right around the same time he’ll finish his last treatment—and is currently finishing up applications to law school.

Jaron is gearing up for the 2017 season and plans to march with the Redcoats again.

More importantly tough, both just want to keep saying thank you to everyone who had supported them throughout this crazy time in their lives.

"I think that while cancer patients are brave, their friends and family are the true unsung heroes of the cancer battle,” Jaron added. “They give patients the strength and motivation they need to carry on through the struggle that is treatment.”