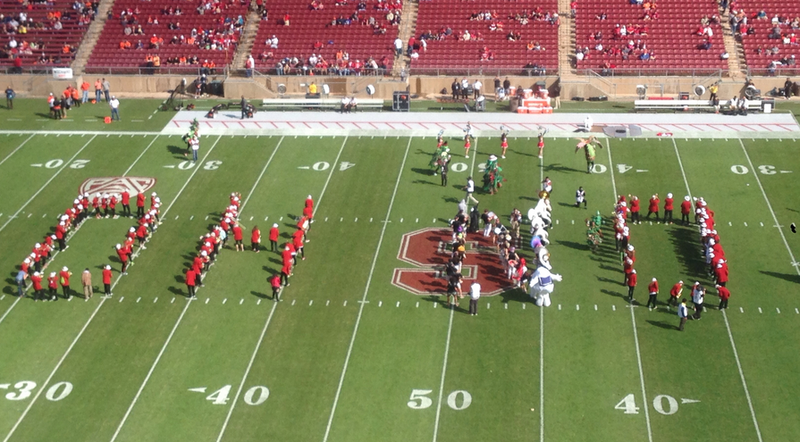 When the news broke that the Stanford Band was being suspended for the rest of the year, many members of the band and it's alumni were shocked and saddened by the announcement. Early this morning the band released a powerful statement criticizing the administration and making their case to overturn the suspension.

"This suspension jeopardizes the vitality and viability of the organization. The Administration’s decision to suspend independent student management of the Band also threatens the integrity of one of Stanford’s few remaining independent student organizations - and with it the values of free expression and irreverence which we believe are vital to a healthy university culture.
More broadly, this sends the disturbing message to the Stanford student body that the Administration chooses authoritative control and administrative expediency over student freedom."

"This suspension disregards all of the positive changes in favor of viciously prosecuting alleged minor infractions by a small number of Band members, suggesting a broader institutional failure to work transparently with students towards clearly and mutually defined goals. Instead, we see an inquisition which seeks a pretense to conform an independent group to its own ends."

They go on to explain how they have worked internally to right the ship...

"For the past two years, Band members have put thousands of hours into satisfying the Administration's requests - all while balancing coursework, research, and trying to enjoy what we’re told are the best years of our lives. Band approached issues brought forward in good faith and with real effort, and this work has resulted in genuine and substantial progress in creating a Band that better mirrors the organization we want to be. We have held hundreds of hours of trainings and discussion, explicitly formulated our values, restructured selection processes for Band roles, evaluated and made appropriate changes to our traditions, and rewritten our founding documents to reflect the present cultural attitudes within the organization."

Now the claws come out...

"Throughout this process, administrators have responded with continually moving targets, incompletely communicated expectations, and a persistent resistance towards viewing the issues from students’ perspectives. We are deeply disappointed that the Administration does not recognize the immense amount of effort put in by students, and we hope to demonstrate the degree to which we have evolved and encouraged positive change. If, as the University now claims, Band has a “systemic cultural problem,” it is that it does not fit into the mold that provides the University a lucrative brand, a well-manicured image, and administrative expedience."

"To so many people, Band is home. Free from powerful norms of conformity, it is a place where self-expression is not only accepted, but encouraged. On a campus centered around the push for perfection, Band offers a powerful and exuberant counterweight that reminds students that life ought to be enjoyed. The quest for mirth through humor and music has brought students of all backgrounds - musical, cultural, and other - together. A ‘sanitized’ Band under administrative control can never serve these same roles, and a valuable student community will wither for the sake of perceived threats to the University’s image."

There is no doubting the strength of the statement and valid points that the band makes, however, it appears that the only way forward is going to be through the demands set forth by the Administration.

The University made it clear that they don't want to take away the funkiness and fun of the band, they just want to add a level of oversight to make sure that the band's actions do not bring another black eye to the university like they did in the Rose Bowl last year at halftime.