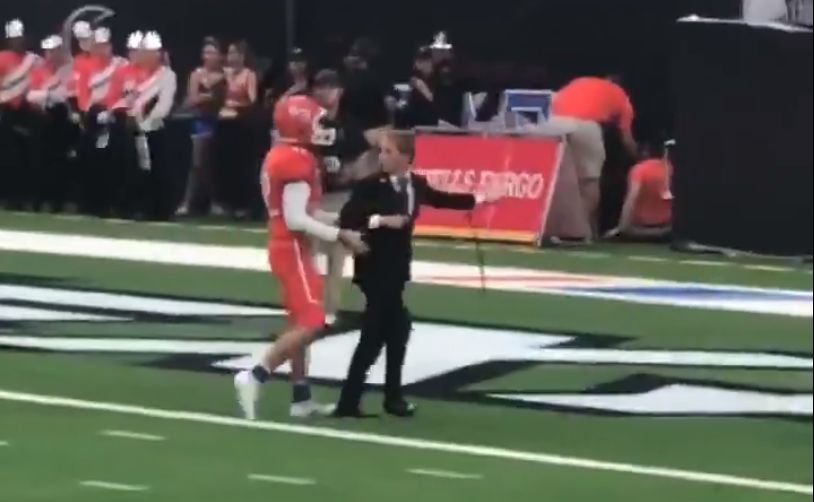 When Stephen F. Austin University and Sam Houston State University met in NRG Stadium in Houston Saturday, the anticipation for halftime was through the roof. Two great bands from Texas together for a show that fans had been waiting for all week long.

As the Lumberjack Marching Band from Stephen F. Austin took the field and began their show, no one could have anticipated what would come next.

While performing the kicker for Sam Houston State, Connor Crow, entered the field much earlier than allowed and began taking warm up kicks on the field.

Lumberjack Band staff noticed the player and immediately went over to the side of the field where Crow was to make sure neither he nor a band member were to get hurt as the Lumberjack Band uses the entire field during their show.

A manager for the team noticed this could be an issue and went up to the kicker, grabbed the tee and appears to tell Crow to come off the field. Crow then takes the tee from him and places the ball down for more kicks. This is when things got a little crazy.

Stephen F.
Austin Associate Director, Chris Kaatz, then took matters into his own hands. He ran onto the field and grabbed the tee and ball. They exchange words and Crow then shoves Katz towards the end zone.

Conference rules clearly state that no kicker can enter the field before 3 minutes left in halftime. However, if the field is till occupied by the bands with 3 minutes left they must wait until the field is completely clear of all band and halftime entertainment before taking any kind of warm up kicks.

You can watch the incident here:

You can literally see how one of the managers was trying to advise him to stop and HE KEPT GOING pic.twitter.com/bHxhpFzFfT


The incident quickly went viral on twitter and has split band fans and football fans on who was right or wrong.

What do you think?