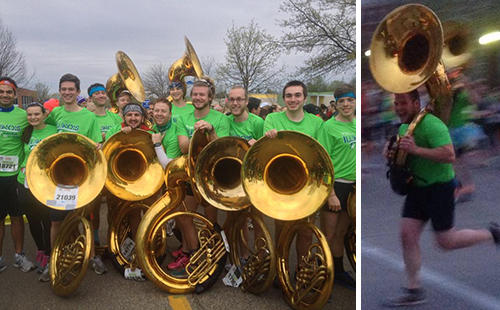 March 25, 2016
Tweet
For many runners across the country, when it comes time to run a race you hope to be in the best shape possible. You've trained for months leading up to that moment. You've changed your diet to fit your new routine and most importantly, on race day you want to be as light and fast as possible. Being light and fast is great, until you add a sousaphone.

On April 29th, 32 current and alumni members of the University of Illinois Marching Illini will run the Illinois Marathon 5K while carrying their sousaphones. Last year the section raised over $2,500 for the charity Notes4Cancer with 11 runners. This year they have doubled their goal to $5,000 to benefit the Crisis Nursery.

The section has been fundraising for quite some time this year, but still has a wildcard that they are hoping will get them to their goal. "After the section saw how much money they raised they began to joke, imagine how much we could raise if we convinced Marching Illini Director Barry Houser to do it," said Jake Diamond, current sousaphone member of the Marching Illini. "There was no harm in asking and Professor Houser has agreed to do it if we raise $5,000."

Training to run a 5K with an extra 30 pounds on your shoulders is no small task, unless you're a college student as you can always just wing it.

"Some members are already great runners and don't need to do any training, others are just planning on showing up the day of the race and having fun with it," said Diamond.

"We aren't concerned about our times, this is all about the cause we are supporting."

Band world please join us in supporting the Marching Illini Sousaphone section and help them hit their goal of $5,000 by donating here: http://marchingillini.com/sousaphone-5k/ All donations go to the Illinois Crisis Nursery.

Who wouldn't want to see Barry Houser run the 5K with a sousa!?!