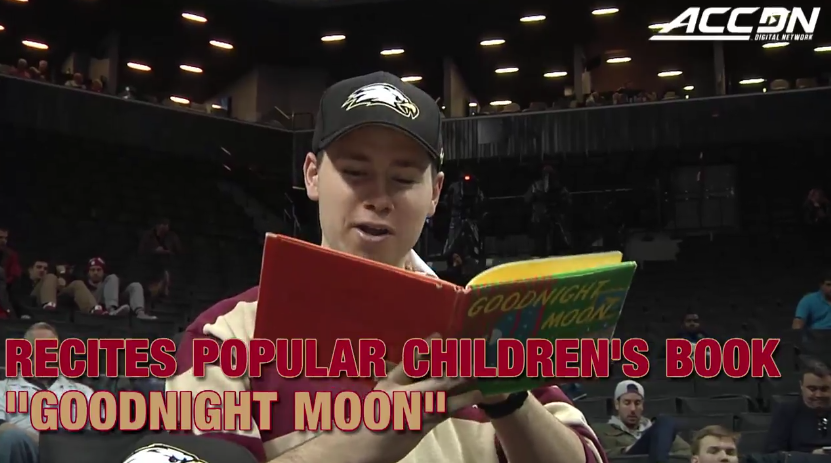 It's that time of year again when the legends of pep bands are born. We've seen North Florida's Turn Down for What Flailing Tube Men pep band member, Crying Piccolo Girl, a wild dance off by the UNC Bands and more. Each year bands take it up a notch and get a bit crazier which is the way it should be.

It's conference basketball tournament time with the NCAA Tournament a week away and we are already seeing some legendary performances by pep bands. For example here is the Boston College Bands distracting free throw shooters by reading "Goodnight Moon"...

There are good FT distractions.. then there is "Goodnight Moon" 😂

Who came up with that idea!?! Genius.

Then there's the University of Miami's piccolo girl. She is by far the biggest fan in the stands and has a great time dancing and showing her school pride. Caution her hair may be used as a weapon.

Only a band from Texas would do this...

And then of course there's the love. In this case the love from the basketball team to the bands. While sports writers may poo-poo bands and tell us that we aren't an integral part of the game or are just loud noise that they have to talk over in their broadcasts (cough cough Laura Rutledge)...

@CollegeMarching.  shame on Laura Rutledge..she says "Thanks for battling with me through all the band noise"...#ESPN #band noise#

...the teams are showing us tons of love. They know how important we are to their success especially when no one except us shows up to support them. Check out the Fresno State women's basketball team going up into the stands to show their appreciation to the band:

@fresnostatewbb went into stands to celebrate with band after win pic.twitter.com/0Xg6Mdotwu

Or the Florida State basketball team showing some love to the band on the plane:

Nice touch from @fsuhoops as they come down the aisles before taking off for the Big Apple. #ACCTourney #Noles #SSATDT pic.twitter.com/iY5wLsgALQ

And of course we get to show our appreciation for each other...

It's one of the best times of the year and we're just getting started. Can't wait to see what else is in store for us during the NCAA Tournament.

Bring your A game pep bands!