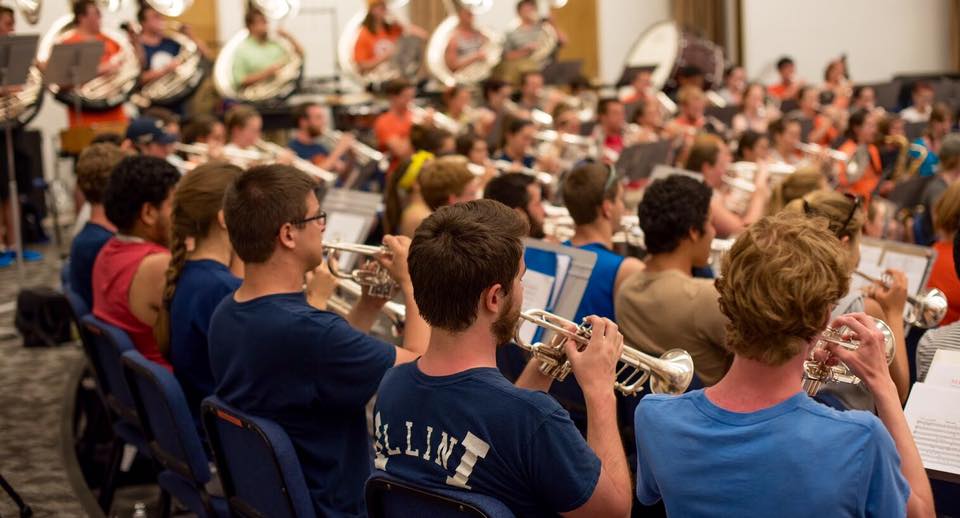 It's official! The Marching Illini are going green!

No, relax, they aren't changing from their traditional colors, they are going paperless.

Thanks to our friends at Tonal Innovation which we profiled for you in February, the band will no longer use music at rehearsal and will instead adopt the "e-Flip" device that is able to hold a small iphone or ipad air to read electronic copies of music. The band already uses Drillbook Next for their drill charts and now with the addition of eFlip they will be completely paperless.

"By moving to this new 100% paperless system, the Marching Illini will save THOUSANDS of dollars annually on paper, copier rental fees, maintenance of the copier, as well as hundreds of hours of staff time put in to making the folders for every student. The sustainability of this project will have many positive outcomes,” said Marching Illini Director Barry Houser in a press release from eFlip.

When Houser says THOUSANDS of dollars he means it.
He averages that the band spends roughly $30,000 to $35,000 per year on paper, copying charges, man hours, flip folders and more related to drill and music. With a cost of $25 each, the eFlip will only cost the band about $9,000.

The Marching Illini are planning to have over 90% of members using eFlip this fall, the rest are members that don't typically need sheet music like the guard. The band will still memorize their music for halftime so don't expect to see the eFlip on the field at a game any time soon. eFlip was created by Daniel Wendt and Garrett Kessling, two LSU Tiger Band graduates who launched their own company, Tonal Innovation, in 2014 while still in school. The eFlip is also being used by the LSU Tiger band and high school bands are also taking notice.

“eFlip is not only great for students, but the savings band programs can realize by going paperless is enormous. Think about it, you have over 300 students in the band, 30 to 50 pages of music, plus 20 or more pages of drill in each marching show… That’s a mountain of paper, ink, and waste…” said Co-Founder and CFO Daniel Wendt.

This deserves a big I-L-L!