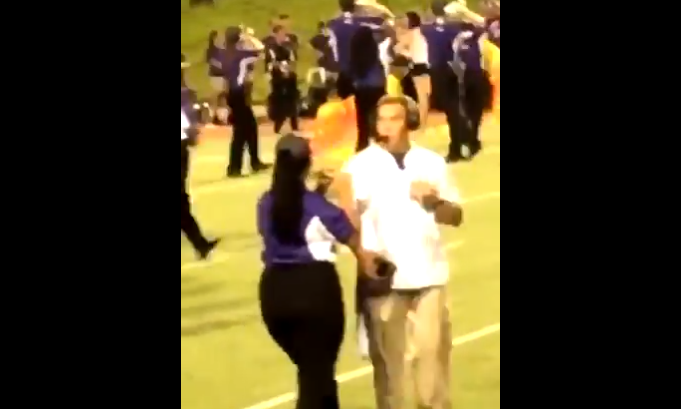 It was a great day for the Stephen F. Austin University Lumberjack Marching Band on Saturday until a visiting Graduate Assistant Coach, Ben Seifert, from Tarleton State University decided to stay on the field during halftime.

What happened next is still a bit of head scratcher.

During the Lumberjack Marching Band's halftime show the coach refused to move off the field. The band carried on with their show expecting him to leave the field or at least stay out of the way of the band. He didn't and as Kitty Hall, a piccolo player, marched towards her spot which he was standing on he raised his elbow directly inline with her face. The result was a serious bruise along her nose and upper lip and a very angry band wondering why he would not move.

The band also reported that he told other marchers to go around him while he stood there.

Video of the incident began to circulate around twitter to bring attention to the incident.

We spoke with Lumberjack Marching Band Director Dr. Tamey Angelly about the incident. She explained that the athletic departments of both universities have been discussing this matter and will take swift action to make sure this doesn't happen again.

"The Tarleton Band Director contacted me right away and while they weren't involved, their Director Dr. Westbrook gave us his full support and offered to help in anyway," Angelly said.

Stephen F. Austin will now also be providing representatives from their Athletic Department at home games on the field at halftime to make sure that visiting coaches, players or administrators stay off the field. Angelly told us that this incident identified a gap in their game day planning and they will know work closely with athletics to make sure this never happens again.

Kitty Hall is recovering and in good spirits. She took to twitter to explain that the elbow to the face immediately set off a bad headache on top of the pain and released some photos showing the bruise to the bridge of her nose.

"I'm so incredibly lucky to have the love and support of my band family and our directors," Hall wrote. "I couldn't ask for a better family away from home."

The coach has sent an apology letter to Hall. Any other disciplinary actions have not been reported at this time.

After Hall got elbowed in the face she did what any other marcher would do, she kept on marching.