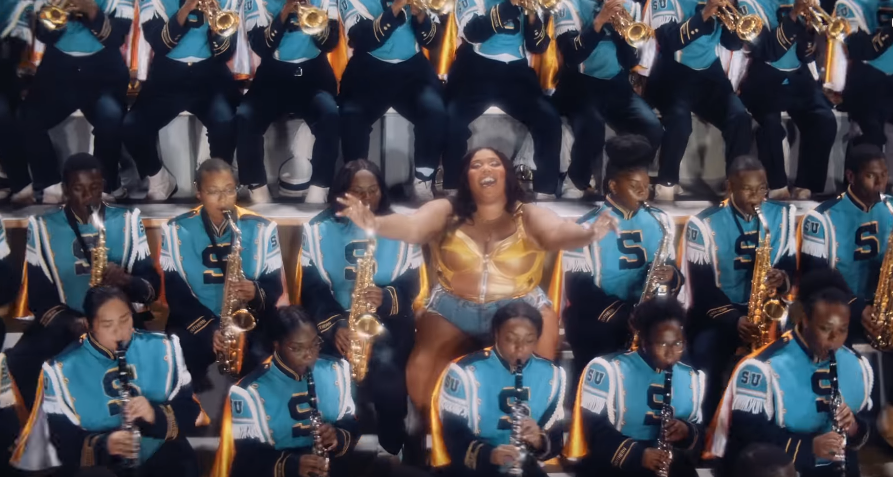 The Queen has returned!

Lizzo, the hottest artist on the planet right now, has just released her new music video for her hit song "Good As Hell". The music video was shot on the campus of Southern University in Baton Rouge and features the Southern University Human Jukebox marching band throughout. Lizzo wears multiple uniforms inspired by the band member's uniforms in the video and tells an important story of supporting one another and believing in yourself.

It's no surprise that Melissa Jefferson aka Lizzo, used a marching band for this video. She herself has deep ties to the marching band world and has been an important advocate for music performance and the marching arts.

Growing up Lizzo fell in love with the flute. She eventually went to the University of Houston to study classical music focused on flute performance.
While at the University she marched in the Spirit of Houston Cougar Marching Band playing flute and piccolo.

She began rapping as a teenager in Houston and finally in 2016 began to gain the attention she deserved with the release of her first major-label album Coconut Oil. Since then she has continued her upward trajectory with performances this year at Coachella and ACL as well as at the MTV Video Music Awards where she stole the show. Her performance at ACL this fall drew so many people to her stage that it caused an over 30 minute delay to the start of Cardi B's performance.

Earlier this fall Lizzo returned to the University of Houston and visited with the Spirit of Houston, she performed with them and watched them practice on the field. It was a memory those members will cherish forever.

Now with the release of the official music video for "Good As Hell" featuring the Human Jukebox she has once again captured the beauty, energy and love that the college band world has not only for her, but for themselves. Well done Lizzo and thank you!

To cap off an incredible year she will be the musical guest on Saturday Night Live on December 21st when Eddie Murphy hosts.