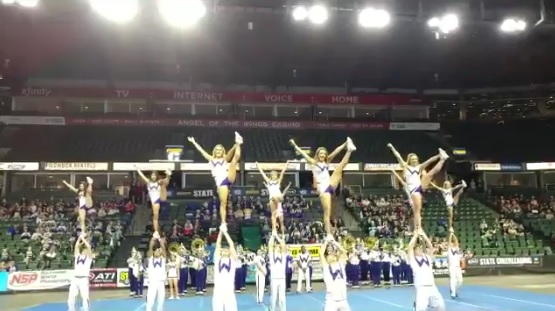 Why has this not been done before? Maybe it has been and we just have never seen it. (If so send us video)

The University of Washington Cheer team performed at the Washington Interscholastic Activities Association State Cheerleading Championships and during their performance they brought out their friends the Husky Band!

At cheer competitions there is always a "spirit" component to the competition where you showcase your school cheers and typically a track plays some fight songs. There is also a tumble track that has some kind of fun dance music that the team uses for tumbling passages and lifts. We love that UW used their actual band for this one instead of a track. This allowed for a much more engaging performance and also allowed for the band to be showcased in front of the large high school audience.
More importantly it showed an important piece of engagement between the band program and cheer team which at many schools have limited interaction together.

We think all cheer competitions should include the bands!! Let's make this happen America!!

Enjoy their performance with the Husky Band: