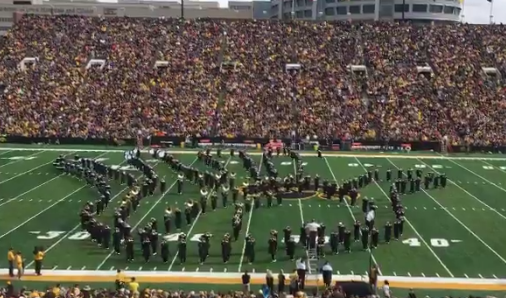 The University of Iowa has gotten a ton of attention this year due to a new tradition that was created at their football games. At the end of the first quarter the entire stadium turns and waves to the Children's Hospital that looks out and over into the stadium.

The kids in the hospital stand near the windows and wave back to the fans in what is a heart warming moment. The wave has been documented now by every news agency in the country and it seems like each week it gets better and bigger.

Well this week it was the Hawkeye Marching Band that helped elevate the legend of the wave.

Here is a look at the formation in action from halftime:

Here's a great view of the @uiowa Hawkeye Marching Band hand wave to the Children's Hospital today during halftime. Love it.👋🏼 pic.twitter.com/A4r9sHbRjj

Not only is the formation great they also sound great!

Well done HMB you have won the weekend.