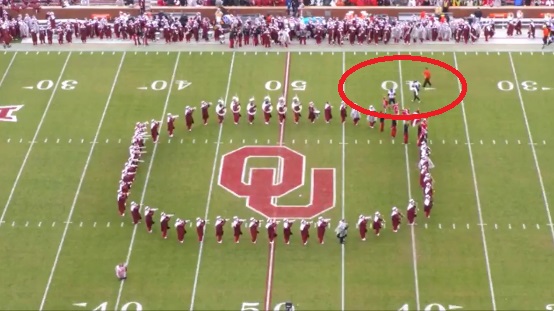 GET OFF OUR FIELD! It is customary that at the final home game of the season, the senior football players are recognized in front of the home crowd. They usually run out of the tunnel and meet their parents and coach for a really sweet moment.

It is ALSO customary that the marching band seniors are recognized during their pregame or halftime performance.

Well, during halftime of the Oklahoma State vs Oklahoma game, the Pride of Oklahoma formed their Block O at the end of halftime which consisted of only the graduating seniors. They then together are recognized for a great group picture, play Boomer Sooner and march off the field together one last time.

Unfortunately for this senior class, their group picture will forever include 3 three members of the Oklahoma State football team as the punters started to take warm ups directly behind them on the field. Not only was this extremely rude, but it could have actually been very dangerous. Luckily for the players, the senior block marched towards the opposite end of the field when they finished.
They could have very easily marched right into them if they went the other way.

Hey OK State kickers did you not notice what was happening right next to you!?! You're lucky they marched the other way

GET OFF OUR FIELD! pic.twitter.com/n7tvPpx55M

Notice that the Oklahoma punters stood on the side away from the band not to spoil the moment for them.

Congrats Oklahoma State kickers, you've now been added to the Band vs Kickers Hall of Shame.