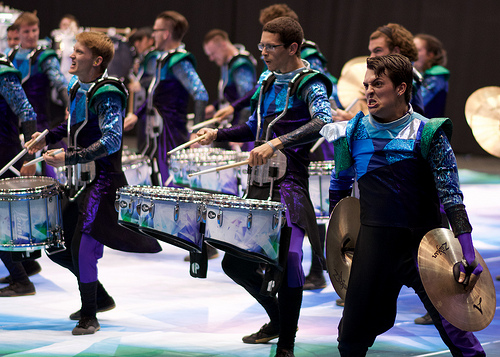 April 29, 2016
Tweet
The marching band family is just that, a family. We support elementary students who are first learning their instruments as well as the alumni who built the foundation for us 80+ years ago. The people we march with become our best friends in life and there is nothing we won't do for a fellow band member when they are in a time of need. At George Mason University that time is now. Dustin Burton, a member of the George Mason Indoor Drumline, recently returned from the WGI Championships in Dayton and was delivered devastating news. He was diagnosed with lymphatic cancer in his neck. Dustin has begun his chemotherapy and will continue for the next four months. This will provide an incredible financial burden and emotional toll on Dustin, but the George Mason Green Machine family isn't letting him battle cancer alone.

Recently his friends in the band set up a gofundme to help alleviate some of the cost that he and his family will incur this year. Over 70 donations have already been made in just a week, but much more is needed.
You can make a donation and see photos of Dustin's fight here: https://www.gofundme.com/tc5z3k8

"It was heartbreaking to hear the news. The ensemble is a family and the well being of one of us is the well being of all of us. It has been a blessing watching how his fellow members and our greater community have responded," said Dr. Michael Nickens, Director of Athletic Bands at George Mason University.

#DownWithTheLump is their new rallying cry on social media and many friends and members of the band world are coming together to support him including the DCI world as Dustin marched with the Jersey Surf Drum & Bugle Corps over the summers.

Please consider making a donation to help one of our own and send him words of encouragement to keep fighting! No donation is too small.