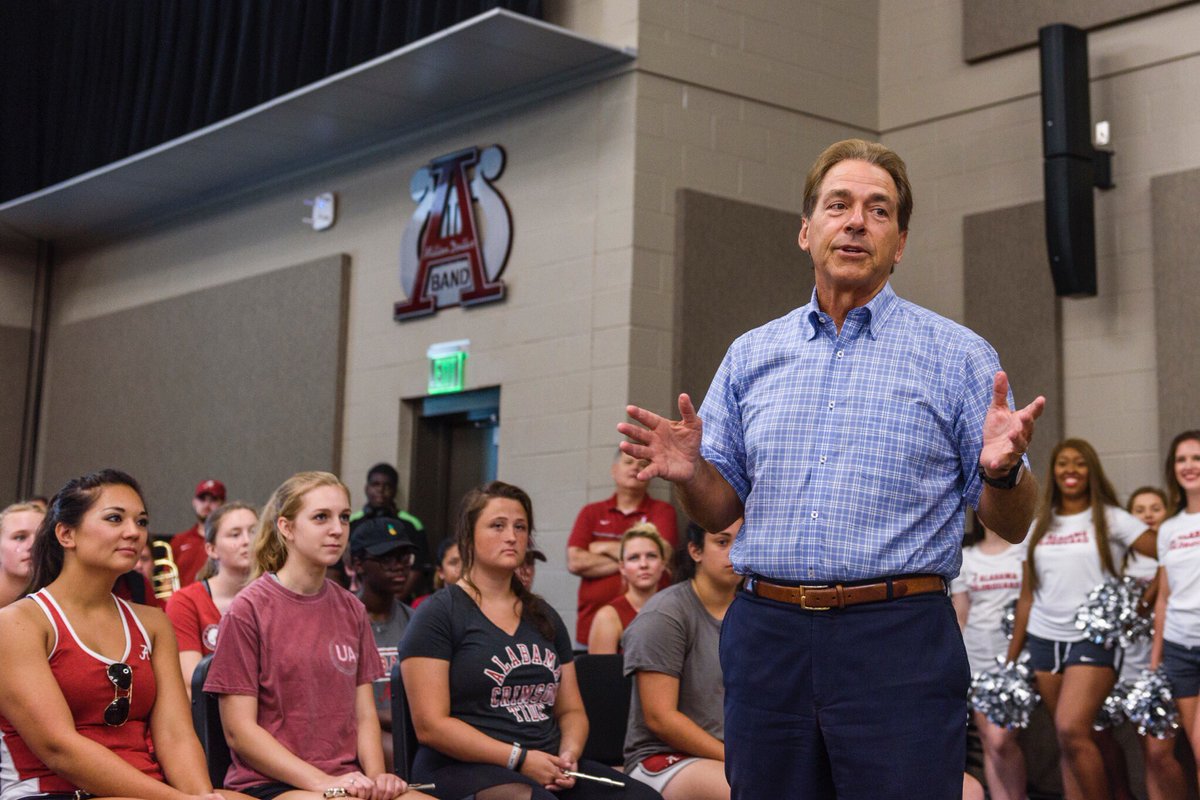 With the season approaching next weekend and band camps in full swing, football coaches are taking time out of their days to stop and recognize the importance of their bands.

Earlier this summer Dan Mullen from Mississippi State came to the rescue of the band due to heavy downpours that swamped their practice field. He offered them the football practice facility and altered their football camp schedule to accommodate them. You can read about that HERE.

James Franklin from Penn State invited the band to come in and invade a team meeting to teach them the fight songs and Alma Mater. Check it out HERE.

And now many more coaches are showing some love as well, including the top coach in the business, Nick Saban.

#Bama day + a visit from Coach Saban? Sounds like a good day to be a member of the Million Dollar Band! #MDB #TodayAtUA pic.twitter.com/VzyoSFwMOW

Jacksonville State University football coach John Grass brought the entire team to see the band practice and catch a run through of the first part of their halftime show. They then had a pizza party together. Grass also addressed the band.

The SMU Band went over to football practice the other night for a surprise visit only to be surprised right back by the football team who brought a boat load of Powerade to hydrate the band during one of their evening rehearsals.

Our guys appreciated the @SMU_MustangBand swinging by practice so much, we decided to return the favor by bringing them some Powerade tonite pic.twitter.com/4kLkQk21k9

Then a jam session broke out...

Our guys were having a blast with @SMU_MustangBand tonight!  🐴⬆️ pic.twitter.com/P7W7D1tgDe

Great to welcome the new Director of the University of Nevada Marching Band Dennis Hawkins with @DougKnuth.       🐺#NevadaGrit🎼 pic.twitter.com/GY1Xyye1qk

Many other coaches also paid a visit to the bands even at smaller schools...

We were HONORED to have Head Football Coach, Ron Roberts speak to the band today! Thank you so much! @sluathletics @oursoutheastern #LionUp pic.twitter.com/LdAq3moHLZ

There are so many more coaches who have stopped by the bands this summer and we want them to know how much we appreciate their support. So make sure you say thanks and encourage this type of interaction. There should never be a wall between the band and the team. That's why we always use #OneTeam to highlight these interactions on twitter because we truly are one team.