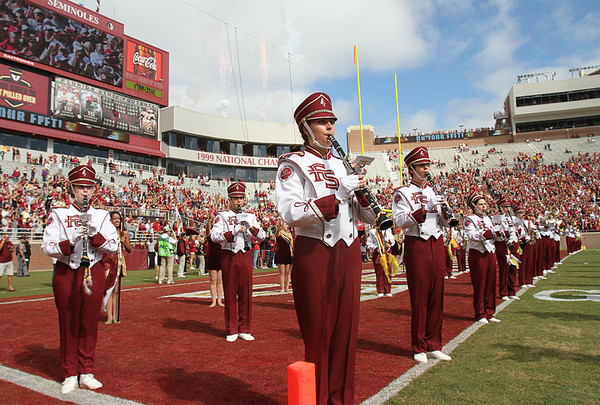 The Florida State University Marching Chiefs made a shocking announcement this morning that they would be cutting all woodwind instrumentalists from the band and will immediately transition to an all brass band similar to Ohio State.

The announcement means that over 100 members of the band will no longer be able to march as part of the Marching Chiefs.

We spoke to Director David Plack about the news. He told us that this has been in the works for quite some time and that the university wanted to let the woodwinds finish this past season before making the announcement.

"While we are sad to see the woodwinds go, I am excited about the possibilities we have now in front of us," Plack told us. "The Marching Chiefs are a world famous band and this is a major turning point in our history. With this transition we know that 'the chop' will now be twice as loud." "One of the things that I am most excited about is to not be stuck on the saxophone bus ever again," he said.
"They have some weird traditions and still think it's funny to sing 'This is the song that doesn't end' from the Lamp Chops tv show."

Flute section leader April Foolsenberg, told us that she and her fellow flute members are shocked by the news. "I could feel this was coming," she told us. "The Chiefs started to make all kinds of rules on how many strings we could put on our flutes for decoration and it just seemed like they were doing everything they could to drive us away. Those strings are our lives!"

"I was really looking forward to adding a few more beads to my flute this past year, then Director Plack told us he was banning all beads from the seven main bead stores in Tallahassee. They framed it as a choking hazard, but I knew the end was insight." The band hopes to fill all of the woodwind spots with at 50 more trumpets, 25 trombones and at least 30 baritones.

"I am really hoping this will allow us to steal the entire baritone sections from the Gator Band and UCF Marching Knights. All those kids wanted to go to Florida State anyway so now is their chance to transfer and march immediately," Plack stated. And we all rejoice!