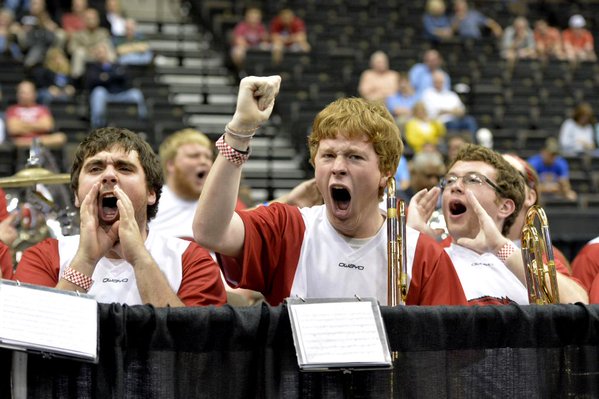 The #ExpandTheBand movement took off last night exciting fans and mobilizing the band world to explore the need to grow college pep bands at the NCAA Tournament and allow electronic amplification. To read the full article about the movement click here.

Even CBS' own Jerry Palm got behind the idea and voiced his support:

#ExpandTheBand  Especially the electronics - it's vital to the identity of those bands. https://t.co/UWKk1MuvSW

Band members are the most dedicated fans of every team. So why wouldn't you #ExpandTheBand, @NCAA? https://t.co/PrBe2ELU7I

@NCAA really does need to #ExpandTheBand. The bands are synonymous with CBB. Put their full talent on the big stage! https://t.co/sXv1vZXMst

The change.org petition that will be sent to the NCAA has jumped into the top 15% of change.org's most active petitions this week and has quickly collected nearly 2,000 signatures in less than 24 hours.

NCAA regulations on Pep Bands prevent them from performing to the best of their ability! Sign here! #ExpandTheBand  https://t.co/CQvN0KcM3j

please take a minute to sign this, it's so important to so many people #ExpandTheBand  https://t.co/RGhl8kTnfo

As an electronics player myself, I think this is super important! #ExpandTheBand  https://t.co/M5ea4gph1C

Sincerely, People who like college basketball to have unique personality, and not be sterile and homogenized.

@CollegeMarching Think there's room for 11 more band members in each band in this arena? #ExpandTheBand pic.twitter.com/3Kh7TcRU00

The band's still need your help and there is still a ton of work to do. Please sign and share the petition within your band community and use #ExpandTheBand on social media throughout the NCAA Tournament. Write to the NCAA or tweet at them. Let them hear you!