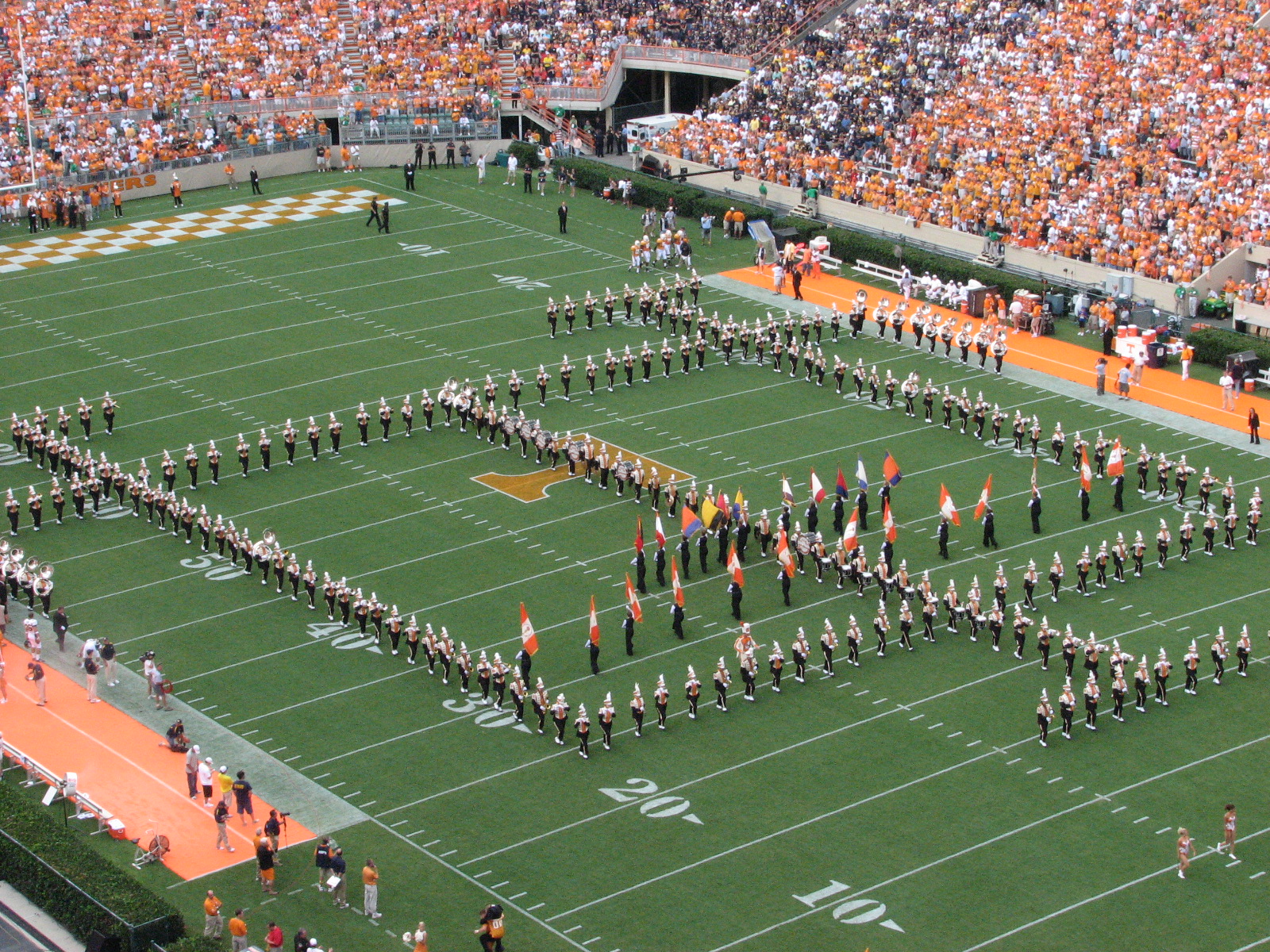 ESPN asked their football writers to name the best fight song in the conference that each writer covers. What followed showed that two of the five writers A) don't really know what a fight song is and B) they just deliberately chose schools based on audience size. I understand it's a business, but please ESPN next time you want to talk fight songs how about you consult us first before just picking the school based on number of eye balls you will get on your page especially you, SEC blogger!

First off, let me just say that there has been a trend lately with random websites called college(insert some word).com that are trying to "rank" college bands. As you know we have stated many times that it is nearly impossible to rank bands. How does one compare Ohio State to Western Carolina? Both amazing bands, but incredibly different. My favorite criteria lately has been "how many celebrity appearances" the band has. Naturally USC wins that ranking every time because they freaking LIVE IN LOS ANGELES! How do they expect Jacksonville State to compete with USC on that criteria? Realistically these writers have never even heard of JSU or Western Carolina which immediately makes their rankings worthless. In fact, most are written by non-band people and are so lazy it's comical. Have you noticed that the same 10 or so bands are always picked. Ever notice that those same 10 bands also are always in the conversation of largest alumni associations in the country. You know what that means? Eye balls. And eye balls = internet ad revenue.

Let's take a look at some of these largest alumni bases in the country (All of these numbers come from the alumni association websites of those institutions):

Now we are not saying that these bands aren't great and some of them might just be in the top-10 bands in the US, but to constantly say that these bands are the best and never include smaller schools in your rankings is a travesty to the band world. Any rankings that don't consider the RCC Marching Tigers, Jacksonville State, Western Carolina, West Chester or North Alabama to name a few are completely worthless.

The 5 power conference schools with the best fight songs according to ESPN are:

Did you notice that four out of five check off on the list of largest alumni associations?

Michigan and Oklahoma are solid choices here. The B1G is loaded with legendary fight songs, but Michigan has to be the leader. Boomer Sooner is a solid choice with Texas right behind them. Texas Tech, Kansas State and West Virginia should also get honorable mention here. I'm okay with these choices.

"Fight On" at USC is also a good choice in the PAC-12, although Oregon, University of Washington and Arizona may have something to say about that. Can't fault the writer for picking USC though.

However, is it even fair to say that they are even comparing fight songs with the other two? At FSU and Tennessee many fans quickly think about Rocky Top and the War Chant which are actually not fight songs. The writers base the majority of their rankings on those tunes, but we are comparing fight songs here. Tennessee's fight song "Down The Field" is great, but it's not in the same category as other SEC schools which makes this decision the biggest head scratcher.

The Arkansas Razorback Band said it best when these choices came out...

Arkansas has one of the best. "Yea Alabama" is a classic or how about "War Eagle" by Auburn? Don't tell me you forgot about "The Aggie War Hymn" at Texas A&M. Mississippi State? Come on! Have to disagree with this choice. Is Rocky Top the best non "fight song" played in the SEC, probably, but we're not talking about that here ESPN and for you to use that as about 95% of the reasoning for choosing Tennessee shows a lack of effort.

Now let's talk about the ACC. Let me first start by saying I LOVE the "War Chant" and there isn't a more intimidating moment in a college football game than the first time the Marching Chiefs play the War Chant at a home game. It is incredible and the Chiefs deliver every time they play it even when they play it 500 times per game. However, we are talking fight songs. Clemson has to be the favorite here. Dare we consider pseudo member Notre Dame? Victory March at Notre Dame may be the best fight song of any school. FSU's fight song is good, but the rankings here weigh War Chant on the same level that they weigh Rocky Top for Tennessee and that's not being fair to the other schools in the conference. I'd throw Pitt and UNC into the mix here as contenders. If Navy ever joins the ACC they will immediately be a contender as "Anchors Away" is almost unbeatable.

Moral of the story is ESPN like these other sites are going to go after big markets because big markets = $$. So don't be offended by their uneducated choices when they try to dive into the band world especially our SEC band fans. It's just business being done by non-band people who are trying to sound smart while failing epicly.

You do you ESPN, leave the band world to us.