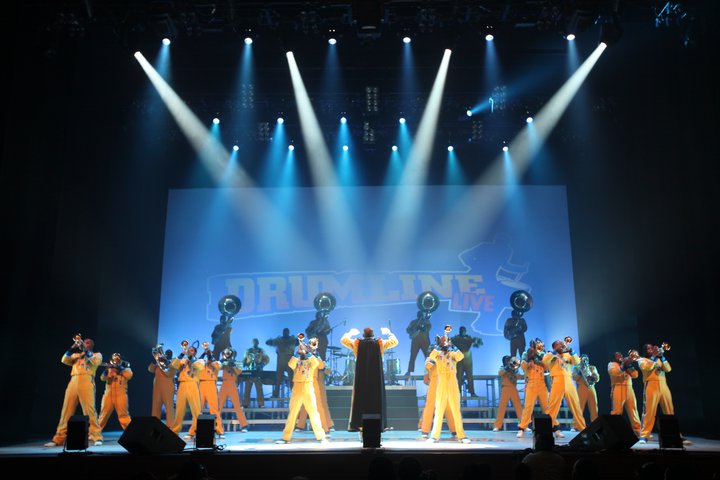 Drumline LIVE Coming to a Stage Near You Well, the creators of the movie have taken the concept from the silver screen to your local theater. Imagine the Broadway show Blast! inspired by HBCU performances instead of Drum Corps.

We tracked down the man behind the madness Mr. Brian Snell, Music Director and Drum Major in the show, to get you the inside scoop on what you can expect to see on their national tour.

How did this show come to life?

Brian: Back in 1996, Mr. Don Roberts worked with the Olympics to bring his high school band to the ceremonies in Atlanta. Mr. Roberts is an alumnus of the Florida A&M Marching 100 and after their performance at the Olympics there was a lot of discussion of doing a movie about HBCU bands. That lead to Drumline. Mr. Roberts was a consultant on the film and in fact many of his high school students were used in the movie as the A&T band. After the success of that movie we got together and decided to try our luck at a stage show which spawned Halftime LIVE.
That show ran for about 3 years before closing in 2007. We then decided to try our luck again and launched Drumline LIVE in 2009. After a few national tours and a stay in Japan we are back for our 5th tour this year and this show is bigger and better than ever.

How many members in the cast marched in college?

Brian: There are 30 members of the cast that include wind players, percussionists, dancers and more. 98% marched in at least high school, but I'd say the majority marched in college also.

What can audiences expect to see in this iteration of the show?

Brian: They will be blown away. We will take you back to the roots of HBCU music and the people who inspire our performances. We touch on R&B, jazz, swing, the Temptations, Earth Wind and Fire as well as Hip Hop and more. We take the audience on a journey through what makes HBCU bands so special and different by showing them our culture. We bring audience members on stage, we get them dancing in their seats, it's just an all around great time.

How many shows will you be doing this year?

Brian: We are going hard through April, we have over 40 shows scheduled and would love to see all the fans from @CollegeMarching come out to support these great performers. I marched at FAMU in the Marching 100 and love the college band community. This show is a ton of fun and is great for all ages.

How can we find tickets?

Brian: Everything is easily accessible on our website. You can watch a preview of the show, buy tickets, read about the show and more. We hope to see you all soon!