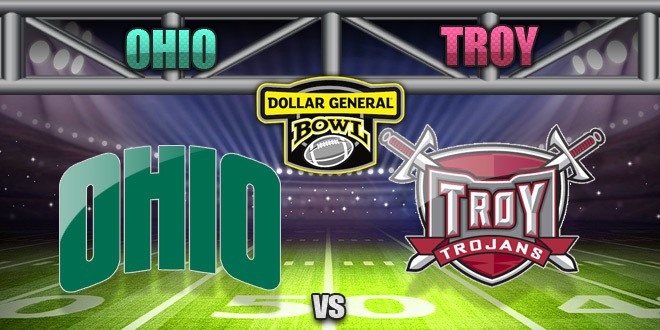 The bowl season has produced some great band match-ups so far this year, but tonight everything gets taken up a level.

Tonight one of the biggest band match-ups of the year will be showcased at the Dollar General Bowl in Mobile, AL. The Ohio University Marching 110 and Troy University Sound of the South are set to meet. Forget the football game. Forget the concessions. This game is all about two powerhouse bands going head-to-head at halftime.

If you are lucky enough to have bought a ticket for this game you will see two different styles of band at halftime. The Sound of the South is the thunder while the Marching 110 is the lightening.

You can expect that, as tradition, Troy will unload their fury on fans with their fanfare to start halftime. It. Is. Awesome. It sets the tone for the amazingness that will follow. One of our favorite shows this year was their first show which featured "Gonna Fly Now" from Rocky. Holy moly they can flat out wail. If you like screaming trumpets then this is the band for you.
Here's a look at what we're talking about...


The Marching 110 are a completely different animal. Their slick arrangements of top music charts and wild dance moves have made them a crowd favorite at stadiums across the country. Many bands have tried to copy their style, but no one truly can top the Marching 110. How often do you see sousaphone players doing splits? While they may be known for their dance moves, don't be surprised when you realize that this is one of the best sounding bands in the country too. Their balance is fantastic and there is no doubting that when they need to crank a tune they can absolutely throw down. Both bands threw down on Rocky this year so we'll use that for comparison...

We think it's safe to say that there will be some fireworks at halftime tonight at the Dollar General Bowl!