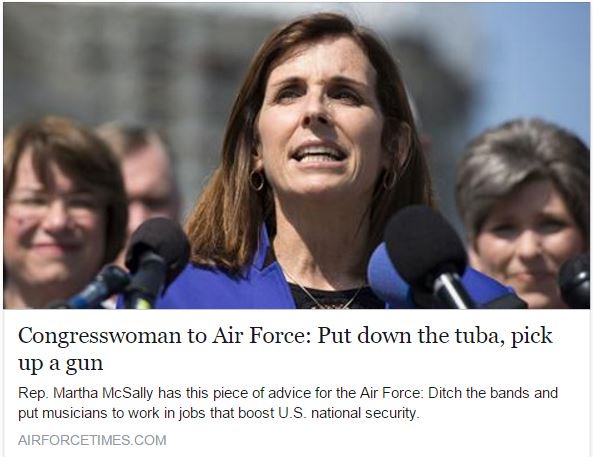 Rep. Martha McSally of Arizona, might have just lost a few band friends from high school after she had some coarse words for the US Air Force this past week: Take away the instruments and put military musicians to work.

On Tuesday, McSally said that the Air Force complains about its manning levels, yet "we have hundreds of people playing the tuba and clarinet."

"If we really had a manning crisis, from my perspective, we would really tell people to put down the tuba and pick up a wrench or a gun," McSally said at a House Armed Services Committee hearing. The Air Force Band program has about 540 enlisted airmen including 20 officers in it's ranks.

The coarse words came as McSally and other members of Congress, have criticized the Air Force's reasoning for planning to retire the A-10 Warthog plane by 2018. McSally was a pilot in the Air Force and is known as the first woman to fly in combat.


I hate to be the bearer of bad news to a woman who clearly has secured the respect of our nation, but being in ANY band is actually a lot of work! For those that are unaware, the Air Force Band program does over 1,000 performances per year! They are an outreach tool to our citizens both at home and abroad helping to build rapport for the military with everyone from foreign countries to elementary school students. Started in 1941, the Air Force band program has become one of the premier military band programs in the world.

One critical piece Congresswoman McSally may have overlooked is the fact that military bands have a specific and important mission. That mission is to communicate with taxpayers and voters about the need to properly fund the military. Bands are aligned under and function as Public Affiars specialists, with the addition of recruiting to their mission. Music opens doors that other public affairs officers alone can't open. Bands bring recruiters, messaging and, most importantly, the uniform to everywhere they go. Bands help fund and recruit the wrench turners and pilots that McSally wants more of.

Regardless of her decorated past, taking on the band world and suggesting to shut down one of the most respected band programs in the country to try and solve "manning issues" within the Air Force seems like a cheap shot to both the band and musicians around the world. Please share this story and rally your friends to show their support for the Air Force Band through the hashtag #MarchOnMcSally or tweet the phrase "I #StandWithAFBand" on social media.

Photos from US AF Band