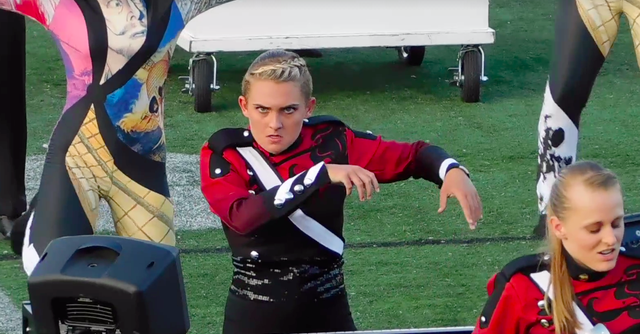 This Boston Crusaders pit member is going viral after a video of her playing keyboards during a recent DCI show exploded in popularity due to her facial expressions and commitment to her role in selling the intensity of the corps 2016 show "Quixotic" to fans.

The video has been seen now by over 2.7M people and those in the non-band world are really confused as to why she is making these facial expressions like she is. Many commenting have no clue of what DCI is or why a keyboardist would be in a marching band, which has made this viral video even funnier. Here are a few examples:

@barstoolsports I saw this girl in the exorcist

@FunnyPicsDepot some of the facial expressions made me think of Lurch playing the harpsichord on the Addams Family!

The keyboardist is Anna Eberhart. Anna is a student at John H. Guyer High School in Denton, TX and is their band's Drum Major. She now can add viral sensation to her college band application and she has also gained a few fans including Grammy winning composer Eric Whitacre.

excuse me while I pass out really quick 😱😱😱 pic.twitter.com/DIEnUiBhVT

The best part of @bostoncrusaders show is keyboard girl, hands down & you can't tell me otherwise