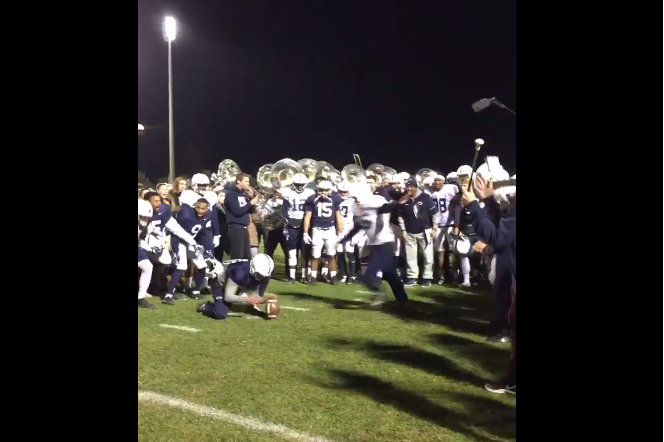 Blue Band Cranks Up the HEAT on PSU Kicker At Practice The relationship between the Penn State football team and the Blue Band continue to grow and grow. Now it is safe to say that they have one of the best relationships in the country and it is awesome to see.

Every Tuesday night during the season the Blue Band practices on the football team's private outdoor field. This helps the band get off of their beat up grass field that by mid season has plenty of markers and a full grid to help marchers remember their spots. Using the team's field helps them master their marching and forces them to not rely on field markers or the grid, better preparing them to march in Beaver Stadium.

Last night as they arrived to the field, the coaches asked them to come help them with the final drill of the day. At the end of every practice the team's field goal kicker lines up to take a high stakes kick. If he makes it, practice is over. If he misses, the whole team has to do some type of intense drill.
Let's just say that the players really like when he makes it.

To take the pressure up a notch and to better simulate a game environment, Head Coach James Franklin had the band circle around the kicker and play 7 Nation Army. The video of the moment is just awesome.

Afterwards the team and band joined together to sing the Alma Mater in another special moment that shows just how close they are to each other.

It is great to see this type of relationship between team and band and we hope that this trend continues across the country.