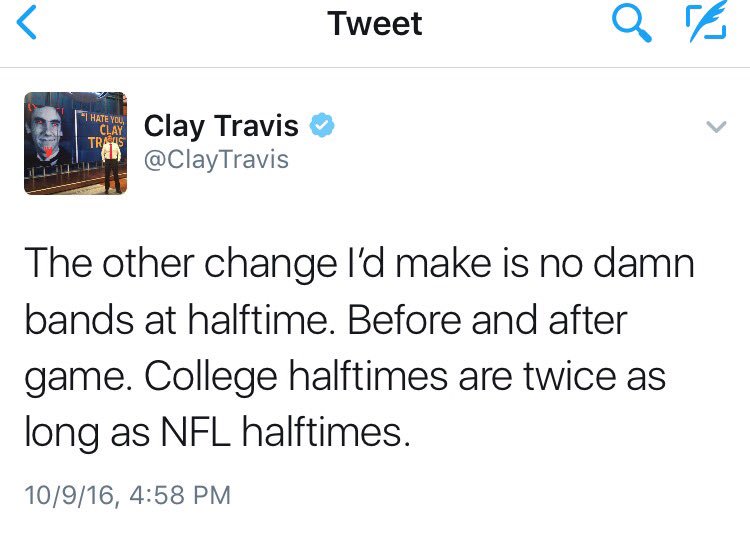 All it took was one tweet for FOX Sports' Clay Travis to feel the wrath of the band world last night and all day today. It's a tweet that reminded thousands of fans of a similar tweet from a few years ago by Jim Rome. Rome quickly learned his lesson and apologized 24 hours later. Travis on the other hand continued to stoke the fire angering the band world further.

#MarchOnClay became the rallying call for the band world as they marched over Travis and his followers on twitter burying them under a mound of rubble.

They then turned around and marched over him again today for good measure. The hashtag so far has reached over 460,000 twitter users and left over 1.6 million impressions on twitter timelines.

Love my "damn band" with our "lame shows" and my "nerd" fiancé  💜 @ClayTravis so sorry you haven't had these experiences #MarchOnClay pic.twitter.com/IUV9T5OL6V

Wow. @ClayTravis needs a hug. Going after college band kids? What band did he get cut from? So hateful. #MarchOnClay https://t.co/zFKvRzbqny

The people in marching bands work way too hard to have people like you ruin it #MarchOnClay pic.twitter.com/fHux4xNfP4

Proud of my "damn band," the @UGARedcoatBand. Best decision I made in college. #UGA We will not let the arts be devalued. #MarchOnClay https://t.co/vtyDvC7Dm9

And the real irony behind @ClayTravis statement is that some NFL teams have drumlines AND EVEN MARCHING BANDS OF THEIR OWN. #MarchOnClay https://t.co/sJwzRrJVft

Idk if he knows it or not but Band Kids take band so seriously and he just made like 1,000,000 enemies. #MarchonClay

We marched on Jim Rome. We'll march on you as well. #MarchOnClay

My "damn band" brings atmosphere and support to our football games. Do what we do, week in and week out before you say anything #MarchOnClay https://t.co/fqRL5ed1vp

With over 2,000 tweets pouring in on Travis he tried to spin the reaction and mock band fans by using old tired jokes only making him, his argument and his followers who joined in on the band bashing look even more pathetic.

Oh, no! Band people are mad at me for saying their halftime shows stink and make college games last too long. https://t.co/sjpmXQFQjv

In reference to bands having fans at the football games...

These people do not actually exist. They are band myths. https://t.co/VijNeEI5ON

As one college band fan mentioned, it's sad that a member of the media has to attack hard working young adults across the country whose sole purpose is to support their partners in athletics any way they can. What Travis fails to recognize is that not all heroes wear a helmet and shoulder pads. Many wear plumes, spats and the crests of their schools on their chests. They toss rifles and twirl batons. They practice 15 hours a week for the chance to inspire the next generation of great doctors, lawyers, engineers and even sports writers.

Band members bleed school spirit and deserve every bit of recognition they get. Actually, they deserve more.

And they deserve better.

So let's offer a solution to Mr. Travis. Instead of insisting that halftime be cut down impacting the band's performance, we suggest that there be no tv timeouts after kickoffs. In fact lets just get rid of kickoffs altogether. Everyone starts with the ball at the 25 yard line after a score. This not only shortens the game, but takes the most violent part of the game out and decreases major head injuries to players. On top of that let's make refs review calls in under 30 seconds. If the ref upstairs can't review a play in 30 seconds then let the call stand. Too many times have the refs taken 2-3 minutes to make their decisions on "plays under further review".

This week, next week, next year, 100 years from now, college bands will continue to do halftime shows because cutting bands from halftime will never happen. Ever.