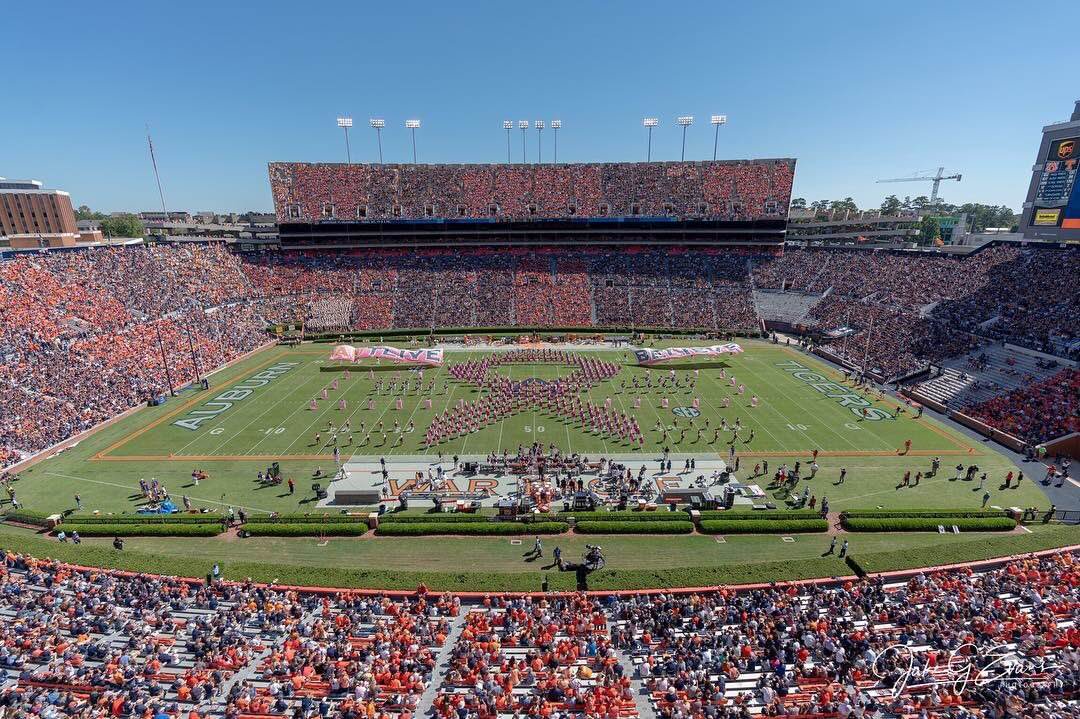 Last Spring, Auburn band member, Sarah DeFalco, felt fatigued and decided to go seek some medical help. After doing some blood work at the Auburn university Medical Clinic, her results revealed some abnormalities and she was diagnosed with acute lymphoblastic leukemia.

"After that, I ended up getting really sick because I didn't have any immune system, so I spent about 40 days in the hospital." Sarah stated in an article from Auburn athletics. "My lung collapsed. I had pneumonia for four months. That was one of the hardest parts to go through, not even leukemia but just all of the side effects from the chemo."

Luckily Sarah has responded really well to her chemo treatments. She has three more months of intense treatment and then two years of more mild treatment.

Due to her battle she had to leave the Auburn Marching Band.
Sarah has always felt that the band and piccolo section was her extended family so when the band decided to honor her at halftime this past week and salute cancer survivors, she was thrilled.

Sarah felt incredibly supported to know that not only the band staff, but also people in other parts of campus that didn't even know her wanted to lift her up and support her in a major way.

"The whole AUTLIVE campaign has been so great to let college kids know that it can happen to anyone," she said.

The band partnered with Auburn Basketball Coach, Bruce Pearl, and the AUTLIVE cancer program which was started by Pearl when he came to Auburn. AUTLIVE raises awareness of cancer prevention and detection while also raising money to benefit cancer patients and local hospitals.

The band wore pink capes at halftime and displayed photos of survivors on the jumbo screen during the show which moved many in the stadium to tears.

Leading up to the game, Basketball Coach Bruce Pearl, helped promote the halftime show at both his press conferences and around campus to students, alumni and fans.

“Watch this performance. And then go get checked.”

“Her bandmates & the leadership of the band didn’t want her to fight it alone.” pic.twitter.com/p4aVVtCZZC

Dr. Corey Spurlin, Director of the Auburn Marching Band gave his thoughts on the show as well.

“We hope we can use our performance platform...to make a difference in a cause that’s really important.”

Sarah hopes to inspire others to look out for signs of cancer.

"If you ever feel something different change in your health, it's so important just to make sure, to go to the doctor, even if you're busy. Everyone on this college campus is busy every day. To take the time to get yourself checked out is so important. Make time for yourself."