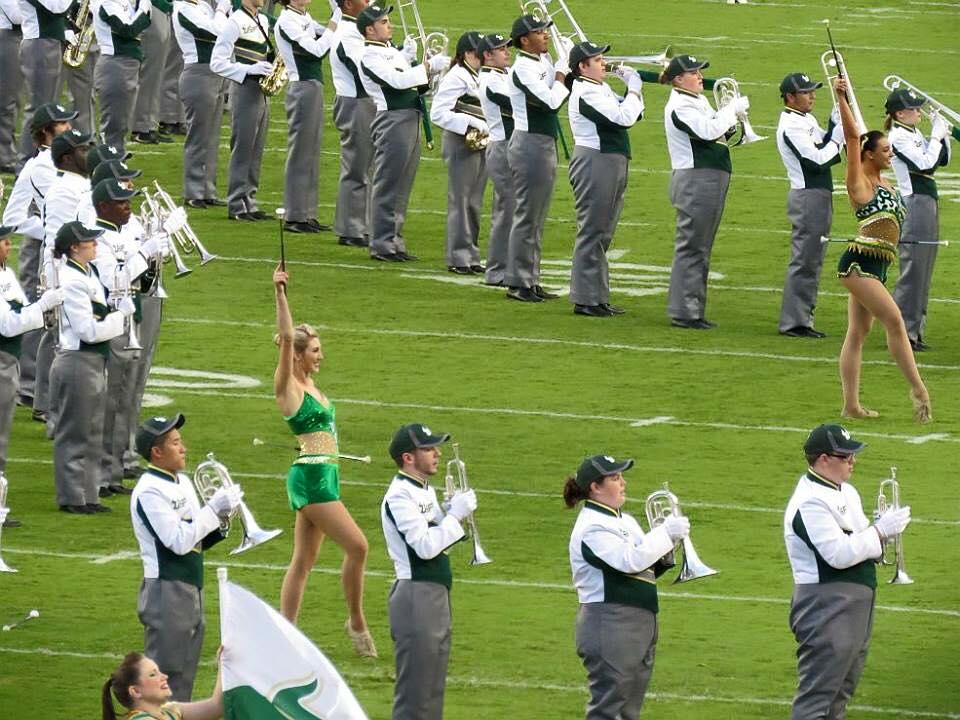 A Tale of Two Twirlers

This past spring, after Morgan Boykin and Danielle Willis finished their first year together as feature twirlers for the USF Herd of Thunder, both were looking forward to a great upcoming season. Morgan had been twirling with the Herd for three years, and served as a friend and mentor to Danielle, who had just begun her journey as a college feature twirler.

Just before the season began, though, Morgan was diagnosed with Postural Orthostatic Tachycardia Syndrome, or POTS, which is a form of dsyautonomia affecting the body’s automatic nervous system and involuntary functions.

Suddenly, Morgan’s life as an active college student was turned upside down. In the span of several months, she went from twirling six hours a week to being confined to a wheelchair.
Meanwhile, Danielle faced the new challenge of filling USF’s feature twirler role alone and worried for her friend.

Morgan and Danielle have been twirling since childhood, and each watched the other develop their respective skills in regional competitions where they’d meet. Over the years, the two became closer friends and eventually ended up as a dynamic twirling duo for the HOT marching band.

Danielle said that when she came on board, Morgan helped teach her everything she needed to be successful as a feature twirler, including how to twirl fire and prepare for band camp.

“I went from feeling completely overwhelmed and nervous on the first day of band camp, to feeling right at home because of Morgan,” Danielle recalled. “I would not be the twirler nor the person I am today without everything she has done and provided me with.” 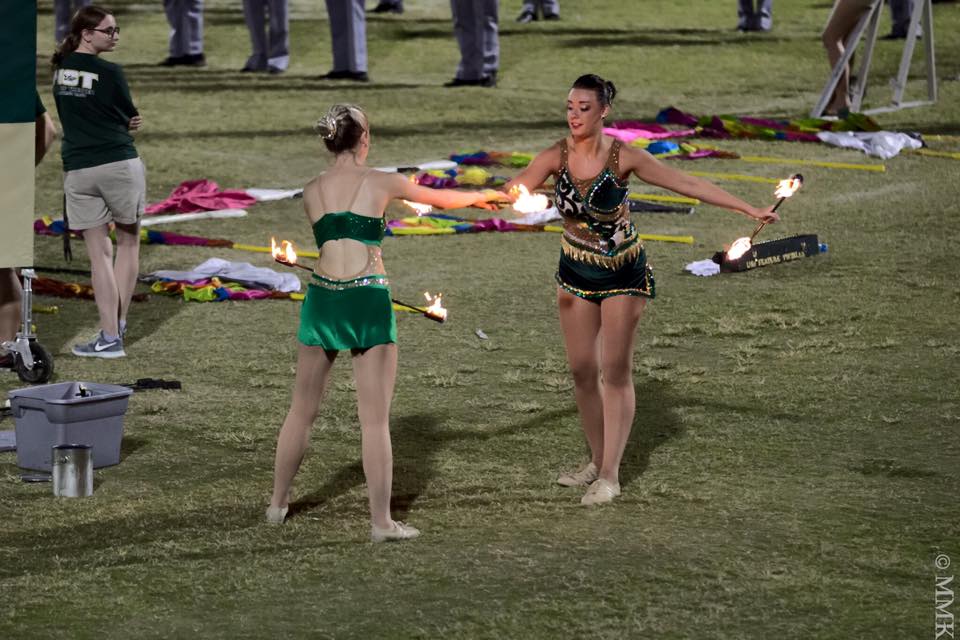 For Morgan, her diagnosis meant she unfortunately must spend this season as a spectator rather than a performer while taking the fall semester off from school. She is currently restricted to a wheelchair, since her severe case of POTS means her heart rate increases quickly with any physical activity.

Though many in her shoes may have given up hope, Morgan’s message is one of courage and confidence. While there is no recognized cure for POTS, Morgan hopes that a combination of therapy and medication will help build her strength and endurance back up, letting her walk again and eventually resume normal activity.

“Although my life is very different right now, I have learned to appreciate the little things,” she said. “We often don’t think about the strength it takes to do a simple task, the happiness a sport you love can bring you, or the wonderful friends and family you have until it’s all you can focus on.”

Both Morgan and Danielle said their HOT band family has been a critical source of strength as they’re each adjusting to new situations this season. At the start of the season, Danielle found it difficult to perform alone after being used to having Morgan by her side. From being upset about her friend’s health situation to adjusting her drill and routines, Danielle felt overwhelmed.

“I was upset for Morgan and her health more than anything,” Danielle said. “I had never done anything affiliated with band without her, and I almost felt lost. The members of this band have been my shoulder to lean on throughout the entire process of Morgan’s absence, as they also love her like a family would.”

Mid-season, Morgan received an email asking if the HOT band and athletic department could honor her at the USF vs. UConn game on October 15. Of all the memories she’s experienced with the HOT band and USF, Morgan said this was a special one she’ll never forget.

“I was blessed to be able to take the field with my band family and be recognized in a stadium full of Bulls fans,” she said. “I’ve had fans cheer for the big tricks and fire batons, but that night they were simply standing and cheering for my fight against dysautonomia. That will forever have a special place in my heart.”

As the season went on and it became clear Morgan would not be returning to the field this year, Danielle refocused her energy to become a solo twirler that would make her friend proud.

“With every performance I do, Morgan is always on my mind,” she said. “I have even more of a motivation to do well and push myself harder than ever this season due to Morgan’s situation.” “In fact, I believe this has made her a better, more artistic, and more confident performer,” he said. “Morgan and Danielle are both wonderful performers, terrific ambassadors for our university and tremendously important members of our program.”

McCutchen said it has been heartwarming to watch many new marchers whom never met Morgan reach out to her with messages of love and encouragement. At one point about two months into the season, Morgan showed up unannounced at the end of a rehearsal with her mother.

“It was the first time I had seen her since the diagnosis,” he said. “Even though she looked frail in her wheelchair, she had a huge smile on her face to be able to see everybody.”

“I had first year band members coming up to me, who didn’t know me personally, telling me they’ve had me in their thoughts and prayers,” she said. “I have always known that the Herd of Thunder was a blessing in my life, but until this year I didn’t realize how big that blessing was.”

McCutchen credits the HOT band’s unwavering support to the character of each participant, and said most college marching students throughout the country would do the same if given the opportunity. “Our students are compassionate, kind, generous, concerned, sympathetic, and loving,” he said. “Marching band works when the focus is on the group, rather than the individual. When one of our members is hurting, we all are.”

To others who may be dealing with POTS or a similar diagnosis, Morgan prompts them not to give up. Though watching everyone else’s reality continue unchanged while you’re “stuck” may be difficult, she says, you have to stay strong.

“It is a hard battle, but you will learn so much about yourself through the journey,” she said. “It is both physically and emotionally exhausting, but if I can use my story to inspire, touch, or even help diagnose just one individual, this is all worth it!”

More information about POTS is available at the Dysautonomia International website. Visit the Dysatonomia Project on facebook