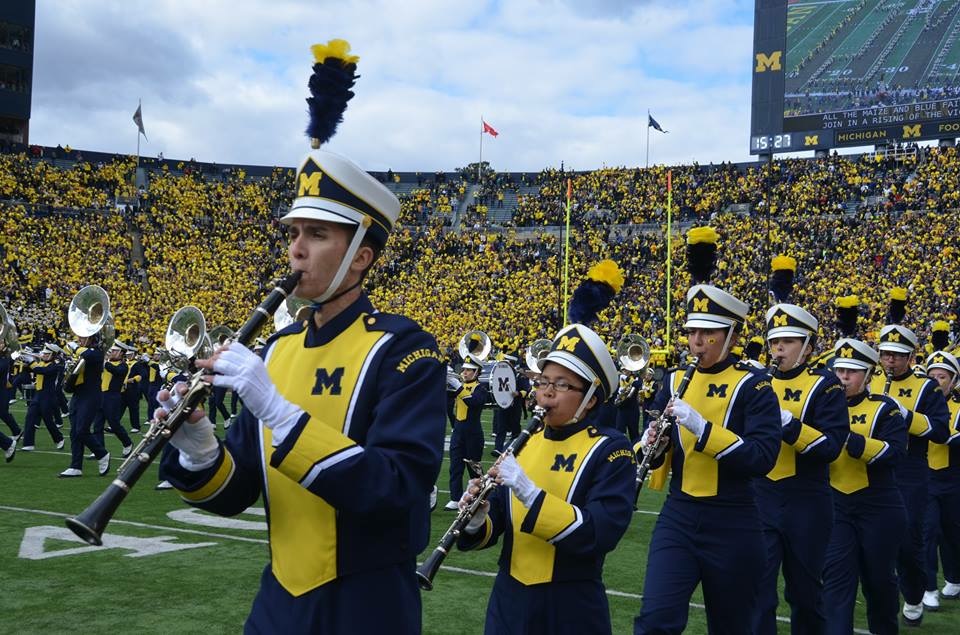 A Marching Dream With a Two-Hour Commute To most people, a two-hour daily commute sounds like something a working professional might undertake for the perfect job.

This trek is a daily reality, though, for one Michigan senior starting his second and final season with the Michigan Marching Band (MMB).

This fall, clarinet player Jacob Wright will again be driving one hour each way from the University of Michigan Flint to march as a member of the Michigan Marching Band at UM’s main campus in Ann Arbor.

“The only thing I ever wanted to do with my time playing clarinet was march pregame just once in The Big House, leading all 110,000+ fans in The Victors,” he said. “To think I got to do that for a full season is amazing, and now it’s even more incredible to think that I get to do it all over again for a second and final year.”

Last year, Wright estimates he spent around $1200 on gas, and that was while carpooling with a second student from the Flint campus who will not be returning this fall.
He’s also on the hook for UM tuition for the marching band class, in addition to his courses at UM Flint.

To help cover expenses, Wright works on the Flint campus as a student patrol officer. A criminal justice major, he says his colleagues at the Department of Public Safety have been extremely accommodating to his “crazy” schedule, and are curious about his unique experience. Being the youngest of three boys in a musical household, he watched oldest brother Jeremy play trumpet with the Bronco Marching Band at Western Michigan University, and middle brother Jon march with the snare line at Michigan State.

Though this creates some fun sibling rivalry, Wright says he grew up watching Michigan football and always had a dream to march for the maize and blue.

“I suppose I have a special nostalgic connection to the team, tradition, atmosphere, and fight song,” he said. “If there was ever one college band I was going to be a part of, it was the Michigan Marching Band.”

After weeks commuting back and forth and spending countless hours behind the wheel, Wright accomplished his big childhood dream and marched pregame for the first time at Michigan’s home opener.

“Just experiencing the noise contrast between the tunnel and the open stadium with the crowd erupting…it was that exact moment of crossing the threshold into a packed Michigan Stadium that I knew my dreams had made their way into reality.”

MMB Associate Director Dr. Andrea Brown said that it is somewhat unusual to have students from UM Flint, but the band averages between 10-15 members from UM Dearborn, which is about 20 miles closer.

Brown said the MMB started more specific marketing and recruiting efforts for students at UM’s satellite campuses this past spring, and that they hope to see these trends continue in the next few years. She said students participating off-campus have the same expectations as all other members, and the only difference is their registration process.

“As a member of the MMB, there are no designations of which campus you attend,” she said. “Jacob and all of our Dearborn and Flint students show tremendous effort to be part of the MMB. It obviously involves some serious time management skills, but the benefits you receive in return are well worth the effort.”

Wright said that for him, these benefits include learning to be resilient and to relish opportunities to overcome constant challenges, like paying for gas, finding time for homework, and dealing with physical and mental exhaustion.

“My time with the band has helped with my ability to stay calm and efficient in potentially stressful situations,” he said, noting that he will attend a police academy upon graduation in preparation to be hired as a certified officer. “I’ve learned to harness an enthusiasm for competition, teamwork, and constant self-improvement.”

For his part, Wright absolutely encourages other students to take the plunge.

“Don’t be afraid to put in the long driving hours,” he said. “Go all in with the commitment, meet and hang out with all your new best friends, have tons of fun, and work hard to achieve your goals.”

Until earlier this summer, Wright anticipated graduating in December 2016, making a second season with MMB impossible. However, after declaring a second major and getting a more flexible class schedule, he found that an online course opened his evenings back up for the two-hour daily trek from Flint to Ann Arbor and back.

As he prepares for his second and final season with the MMB, he often finds himself thinking about his dream coming to a close.

“The main thing I’ll do differently this year is to soak in the time I have at every game, event, and rehearsal, since this is the very last time any of this will ever happen for me,” he said.