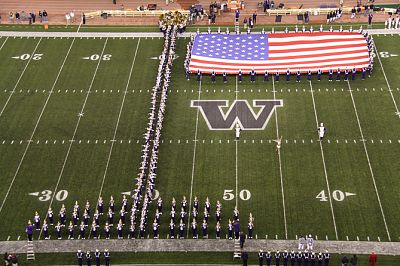 We are quickly approaching the start of the college football season and it is clear that the anticipation is building to an extreme level as the single digit day countdowns begin.

We continue our tour across the country hearing about what is in store for band programs this year with a stop at the University of Washington. Director Brad McDavid gives us the inside scoop on what to expect this year from the Husky Band

How many years is this now for you at UW? What are you looking forward to the most this season?

I’m excited to be starting my 23rd season with Husky Marching Band! We’ve got seven home games this season so I’m excited about all seven shows that we’ve got planned. However, I think I’m particularly excited about our patriotic show which annually occurs at a home game just before Veterans Day. This year’s show is a tribute to the 75th anniversary of the bombing of Pearl Harbor.
We’ve got some very stirring and poignant things planned for this special military tribute.

The UW is one of the few remaining Division 1 schools left on the quarter system so our band members have to report back three and a half weeks prior to classes starting the end of September. The Freshmen audition on September 4th with our camp starting on the 5th. Where will the full band be traveling this year? Any other special performances? What can we expect at halftime this fall?

Due to the distance factor, bands in the Pac-12 send a lot of smaller pep bands to our respective games around the conference. This year we’re taking a pep band to our games at CAL and Oregon. The entire band will be busing to Pullman for the BIG Apple Cup game with Washington State! Some of the halftime themes we’re planning for the upcoming season include our 64th annual high school band day which we believe is the longest continuous band day in the nation. Another show we’re really excited about both musically and visually is a tribute to the 40th anniversary of the movie ROCKY!

If there was one other band in the country that you'd love to host at UW who would it be and why? Who will you host this year?

I would love to of course host my alma mater, Ohio State. We’ve played OSU 4 times since I’ve been at the U-Dub and I’ve been fortunate to take a pep band back to Columbus, but we’ve never been able to host the OSUMB, nor have we ever played them in a bowl game. To have both bands share the field at halftime, for me and for the members of the HMB, would be really special. This year, we are opening with Rutgers and I’m excited that we get to host their pep band. We’ll also be hosting a portion of the USC band.

What does it mean to you to come to work every day in this role? What do you hope the students take away from their time in band?

The saying, “If you love your job, you never have to work a day in your life” could not be more true in regard to how I feel about my position here at UW and the incredible students I have the privilege of working with. One of the best parts about my position is the fact that since we are continuously taking portions of the band out to perform around greater Seattle throughout the year, I have the chance to see many of the students on a year ‘round basis and really get to know them on a much deeper level than most of their college instructors. What I hope each student takes away from their years in the Husky Band and long after they’ve forgotten the names of the tunes or the halftime themes, I hope they will recall the incredible feeling of accomplishment and the sense of family that we stress throughout the season.


One embarrassing fact that I don’t tell many people is that when I marched the Rose Parade in 1985, all of us in the sousaphone section were so nervous about our shoulders throbbing before we reached the end of the parade that we went to a convenient store and bought pampers diapers the night before the parade to pad our shoulders. Unfortunately not all the diapers stayed under our uniforms and when we glanced behind us, there were diapers all over Colorado Blvd! Needless to say, when I had the good fortune to take the Husky Band to the 2001 Rose Parade, I intentionally did not mention that to my guys in the souse section!