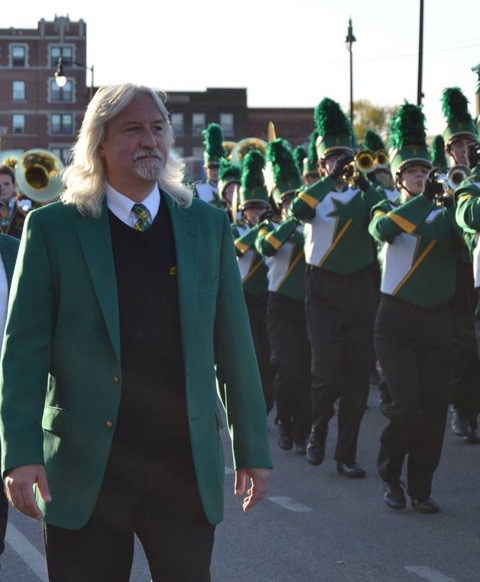 What are you looking forward to most this season?

I have a good group of students coming in - excited to be in the band and excited for the marching band and football season. The team promises to be good again this year - so we will be playing in a really great and crazy atmosphere!

Camp begins on Friday August 12th with the band leadership arriving, Saturday the Drum Line and Color Guard arrive and Sunday the rest of the band reports.
We go after it first thing Monday morning! I enjoy it when the veteran marchers are reunited at the beginning of camp - and also watching the friendships and bonds being formed by the first year marchers by the end of the week!

Where will the full band be traveling this year?

We are going to bring the GSMB to the Bison vs the University of Iowa Hawkeyes game in Iowa City in September. We’re really excited to play in front of 75,000 people and on ESPN - and to see and hear the great Iowa band!!

If there was one other band in the country that you'd love to host at NDSU, who would it be and why?

I would LOVE to host the Auburn Band. I think Cory Spurlin does a tremendous job with that group! Of course there are many other bands too - but Auburn is fantastic I think. Unfortunately we rarely host bands here at NDSU. We play in the Fargo Dome and sell out all the games - no room in the stadium for other bands and no room on the field either. We did have 75 members from the Sam Houston State Band come for a playoff game a couple of years ago - but that was the last. It is a Very unfortunate situation since I would love to have more groups visit. It also makes it very difficult for me to host a traditional high school band day.

What does it mean to you to come to work every day in the role? What do you hope the students take away from their time in band?

We all know there is a lot of “work” in this job. Taking care of the details and getting the lists taken care of etc etc. But being involved in an group that you know is having fun (and working hard) and being in charge of an activity that helps students grow, learn new skills, make connections and create friendships - that helps to make the detail work much easier. Also I know that the GSMB is well liked and respected in and on our campus, our community and region and that we are positive ambassadors for North Dakota State University. The students who really get into it during their time in band - whether its 1 or 5 years (!) hopefully come away with a sense of accomplishment and feeling that they were part of something bigger than just the individual. We all know that marching band functions best when the kids feel they are a part of a community. Hopefully my students feel this when they are in the GSMB.

When I was younger I had a dream to be the percussion player in Frank Zappa’s Band (didn’t work out…) and honestly, I actually enjoy riding on the band bus on trips.

Fun Fact: The GSMB is coming off their fifth consecutive football national championship in Division I-AA. We were lucky to be at the National Championship game last year with the band and were incredibly impressed by not only their performances, but by the caliber of member in the band. Can they make it 6 in a row?

Missed one of our other season previews? Check them out here: